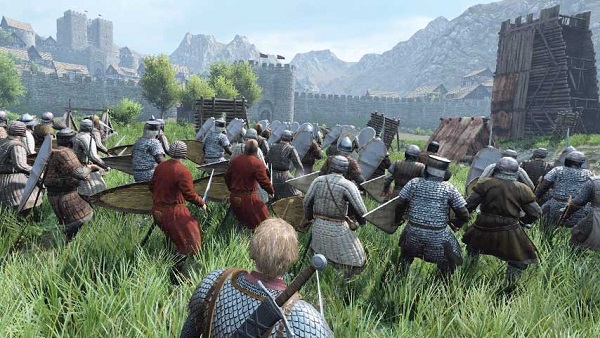 Our Mount And Blade 2 Bannerlord Beginner’s Guide will help you with the best build for the early game along with which factions to choose and more.

Mount & Blade II Bannerlord might be in early access but gamers are hungry for the game. The game can be a bit difficult to get into since players have to make a lot of choices while they create their character. Our Mount And Blade 2 Bannerlord Beginner’s Guide will help you with everything while choosing your character along with the best beginner build.

Before players even start creating their character in Mount And Blade 2 Bannerlord, they have to choose the faction. Choosing a faction determines your character’s backstory, culture, bonuses, and disadvantages.

There are a total of 6 factions for players to choose from including Vlandians, Sturgians, Empire, Aserai, Battanians, and Khuzaits. While you can choose any of them, some factions grant bonuses that will greatly help you in the early game. The following are the bonuses for each of the Mount And Blade 2 Bannerlord factions.

Vlandians
This faction grants players a 20% additional troop upgrade XP for each battle. Obviously, this will allow you to quickly upgrade your party. This faction is best suited for players who take every challenge head-on and do a lot of fighting.

Sturgians
This faction allows players 20% less penalty on movement speed for traveling in snow. Meaning, it allows players to be 20% faster compared to other factions. However, given that you don’t always be traveling on snow, I recommend you avoid this faction since it’s one of the weakest ones.

Battanians
This faction allows the party to move 12% faster in Forest Biomes compared to other factions. Forests are more common compared to snow in the game so choosing this faction can really help you.

Khuzaits
This faction grants a 10% speed bonus for horsemen on a campaign map. Not only that, Khuzaits also have cheap cavalry which can be useful.

Aserai
This factions grants 30% reduction is Caravans’ cost and 10% less trade penalty. This faction can make players rich early in the game if they play as a merchant.

Mount & Blade II Bannerlord features 6 different attributes which include Vigor, Control, Endurance, Social, Intelligence and Cunning. Every three levels, players will obtain an attribute point which you can use to unlock the attribute of your liking.

Vigor is an important attribute for melee combat. “Control” is tailored towards ranged combat like throwing weapons, bows, and crossbows.

“Social” will allow players to understand people’s motivations which is a good attribute for Traders and can improve the amount of money you can make.

“Intelligence” is an attribute that helps players to become steward, engineer or a medic. Being a medic is useful for those players who fight a lot as they’ll be able to heal faster.

Family
Choosing the current family will greatly impact your play style. Choose the family depending on the weapon you want to use primarily throughout the game.

Adolescence
Here you’ll choose “hunted small game” option as it’ll grant players +1 Skill to Bow and Tactics. Tactics will come in handy in the late game when you start deploying your army.

Youth
Here you also have two options: “Trained with cavalry” and “Rode with the scouts”. This choice depends on the player as both are good for the build. The former grants skills in two-handed weapons while the latter grants skill in ranged weapons and riding.

Young Adulthood
For this build, you need to choose successfully led a manhunt. This choice grants players with points in Tactics and Leadership.

Background
Here you need to choose that you drove them off with arrows. This will grant players with 2 focus points for bows and one focus point for Control. This will make the bow very powerful and will make things easier early in the game.

Once you have created your character and early build, it’s time for players to recruit mercenaries by visiting nearby towns and villages. 15-20 troops are ideal to fight off bandits. Also, you need to feed your troops as well. Grain, Butter, and Cheese are the best options as they will keep your troops fed for a long time.

“Looters” are the first enemies you’ll face in Mount And Blade 2 Bannerlord and are quite easy to defeat. Defeating looters will net players XP as well as for their troops.

Not only that, defeating looters will also grant them Morale and Renown. Also, looters can drop useful items and food.

Mount And Blade 2 Bannerlord has the predetermined speed for each part of the map. Meaning, the movement speed is different in the Forests and the Snow.

Movement speed plays an important part as it’ll determine is you’ll evade the enemy or catch him. Being fast will certainly give you an advantage early in the game.

That is all for our Mount And Blade 2 Bannerlord Beginner’s Guide with tips on the best build, which faction to choose and more. For more on the game also see our How to Sell and Recruit Prisoners and Skills And Perks Guide.