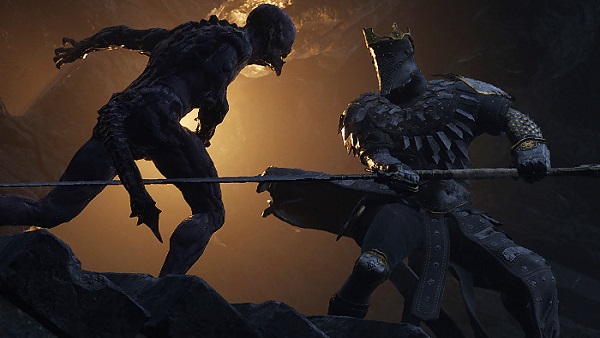 Hadern in Mortal Shell is a boss whom you’ll come across in the tutorial area. Similar to Sekiro: Shadows Die Twice, you don’t really need to beat the boss but if you do, you’ll earn an additional item as a reward. In this Mortal Shell guide, we’ll walk you through everything you need to know about defeating the tutorial boss in the game.

When it comes to the actual fight, the sword has way too limited range, forcing you to stay in close-range. Failing to do so will cause you to whiff your attacks which Hadern will waste no time in punishing. Therefore, try to maintain distance accordingly.

As soon as the battle starts, you need to try and dodge behind him in order to land 1-2 hits before moving away. Remember that you can instantly harden yourself after landing an attack so try to use it to your advantage. If you see an attack that you think you won’t be able to dodge, try to harden yourself, back off to recover a little, and then attack.

If you try to keep your distance, the boss will leap at you with a devastating attack. The attack, however, is fairly easy to dodge and you should be able to do it without much effort. Hadern will also use the weapon’s Mechanical Spike skill that you can dodge by simply dashing backward.

Lastly, the boss has a 3-hit combo which deals an incredible amount of damage. You need to try not to get hit by it! To do so, simply dodge backward and you’ll avoid the damage. Mostly importantly, remember to take the fight slow and not get greedy. Keep at it and you’ll complete it in no time.

This is all we’ve got in our Mortal Shell Hadern boss guide. For more help on the game, you can check out our detailed Mortal Shell wiki guides.