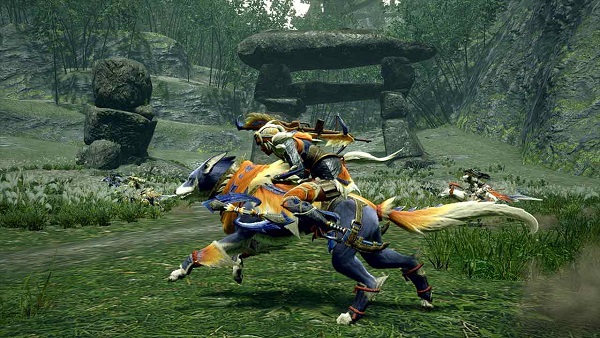 As the name suggests, Wyvern Riding is nothing more than being able to mount large creatures in the game. Once mounted, the player will have complete control over the creature which can be incredibly useful. But how does one mount these monsters?

To begin, the monster must be put in a mountable state. There are multiple methods to do this i.e., Silkbind Attacks, Wirebug Attacks, Aerial Attacks, Puppet Spiders, etc. Another good method is to pit one monster against the other by luring them in the same area. When using things like Wirebug Attacks, make sure that the damage numbers are blue. Once it is in a mountable state, it should get fairly simple to ride it.

Lastly, do note that no creature in the game can be mounted indefinitely. A meter visible on the screen shows for how long a player can continue to ride a creature. Another thing to keep in mind is that attacking while on the monster extends the time whereas taking damage depletes it.

Below, we have provided a few controls that can be used while on a monster-back:

Most of these maneuvers can be executed at any time with the sole exception of Mounted Punisher as it requires a completely filled Wyvern Riding meter – this is something that should be kept in mind.