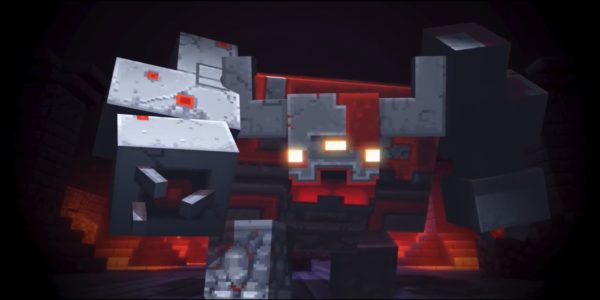 Our Minecraft Dungeons Guide will help with the best tips and tricks for both melee and ranged play styles so that players can easily defeat Redstone Monstrosity.

How To Beat Redstone Monstrosity

Redstone Golems aren’t that difficult to deal with but they spawn quite frequently. Here we will discuss how players can defeat the Redstone Monstrosity. We will be discussing tips and tricks for players who like melee play style and also for the players who prefer ranged play style.

Before we start with how to defeat the Redstone Monstrosity, keep the following patterns in mind.

One benefit of ranged weapons s that players will have to get some distance between them and the Redstone Monstrosity and its minions. Given the hulking frame of the Redstone Golems, players can easily get them stuck on map scenery if they create enough distance.

Make sure you have ranged weapons with a high rate of fire. If not, just use the Accelerate Enchantment as you’ll be spamming projectiles at the Redstone Monstrosity.

However, given that the arena is full of lava and other obstacles it’ll not be easy to get away from the boss. Just keep calm and use your head. Keeping your distance will not only keep players safe from its attacks but will make it easy to spam arrows at him and eventually defeat him.

If using ranged weapons isn’t your style then we’ve got you covered. For the melee strategy to work, players need either an armor with Potion Barrier Enchantment or a weapon with Radiance Enchantment.

Having secondary healing is good so we recommend having Soul Healer for the Artifact.

However, Death Cap Mushroom is also valuable as it increases the attack speed. To use this attack speed buff, players need to bait the golem to launch a crouching mine attack.

In this attack, white orbs appears on the ground. During the attack, the back of the Golem is vulnerable. Use the attack speed buff to hit it as much as you can taking a chunk of its health.

It’ll get up to attack you. Here you have two options depending on whether you have the healing potion or not. If you have, stand there and take damage, then heal and keep attacking it. Otherwise, just move back.

If the player tanks enough attacks from the Golem, it’ll again launch its crouching mine attack. Its back is vulnerable gain and players can deal enough damage.

If the Golem’s melee attack is bothering you, then roll back behind it and maintain distance until it initiates the mine attack again. All of these strategies, apply to the Redstone Monstrosity too.

That is all for our Minecraft Dungeons guide on how to beat the Redstone Monstrosity. For more on the game, also see our EXP Farming Guide and Secret Levels Locations Guide.