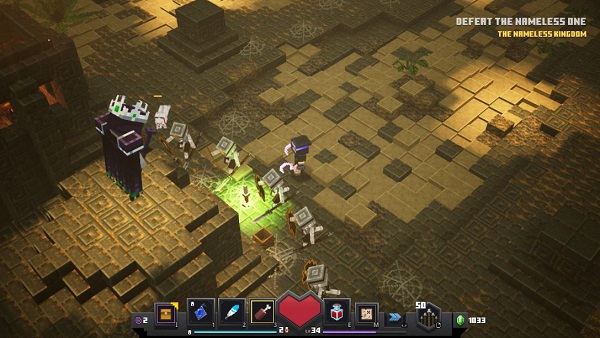 Minecraft Dungeons is a brand new action RPG released by Mojang. The players take a long journey to defeat the Archilleger and his minions aka mobs to save the realm. In your journey, you will find a wide selection of loot and many different types of enemies. Minecraft Dungeons is a fun dungeon crawling experience.

How to Beat The Nameless One in Minecraft Dungeons

The Nameless One is capable of doing a lot of damage so the key to this boss fight is evasion. The boss can cast spells that can do damage and hit you multiple times repeatedly.  The best play here is to stay away from it and use range as an advantage. Ranged builds especially come in handy when facing Minecraft Dungeons’ The Nameless One.

The Nameless One has a devastating green energy attack that hits you fives times in a row. To avoid his green energy blast you should strafe from side-to-side, avoid going up and down. Keep your distance from The Nameless One otherwise, you won’t be able to avoid this common attack. The amount of damage these five consecutive attacks do is enough to kill any Minecraft Dungeons player.

The Nameless One’s strong suit is the spells. In addition to the green energy attacks, you’ll also face another spell where The Nameless One can summon seven skeletons with shields. The best way to deal with the Skeleton adds is to use area of effect attacks as well as a ranged weapon attack that damages their shields.

When trying to beat this The Nameless One you should keep an extra healing option in addition to healing potions. Use wheat or right totem. Never have your health less than three-quarters, otherwise, the green energy attack can kill you in one shot. You can use your own spells as well, summon a wolf to divert attacks and do damage to the clones.

When you take too much damage move as far back as possible and shoot from the distance until you heal yourself back to full health. One of the best tips we can give you is that you should avoid using melee attacks.

The Nameless One Rewards