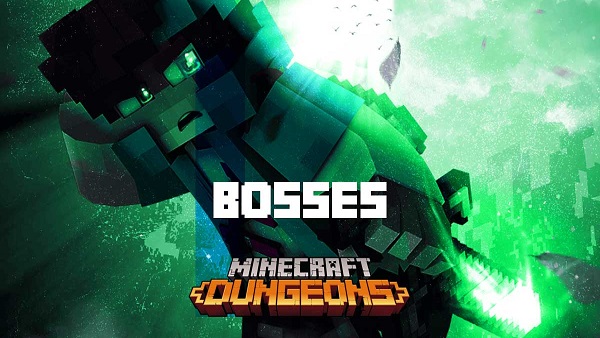 The first boss in Minecraft Dungeons isn’t a main boss, it is a mini-boss called the Evoker. Mini-bosses are scattered across the game at various locations and they are pretty tough to beat. They are used to create additional obstacles in Minecraft Dungeons as well as give players the opportunity to earn more loot and emeralds. You will find the Evoker in the Pumpkin Pastures, in fact, there are three of them in this area. This enemy type can call in minions and use a range of attacks to create trouble. When you come across the first Evoker use that opportunity to get an idea and feel for this type of enemy. It helps you understand how to deal with it so it is OK even you fail the first time. The first boss encounter will help you do better in the second Evoker encounter.

Be careful of the pincer attacks of the Evoker which it summons from the ground, they can grab and crush you.  The pincer attack either surrounds the Evoker or comes as a frontal attack. The pincer does huge damage so make sure you avoid being hit. The frontal attacks trigger whenever you are in the range of the Evoker in Minecraft Dungeons. The surrounding attack happens when you are too close to the Evoker. The mini-boss also does calls in minions that can quickly overwhelm you. The good news is that the minions can be killed with ease.

The best way to deal with Evokers is to avoid being in a range of attacks. We do not recommend using melee attacks against the Evoker as its pincer attacks can do plenty of damage when you are in range. Keep your distance from the enemy and use ranged attacked as much as possible. Do not spam the dash button when facing the Evoker in Minecraft Dungeons. The Evokers can perform multiple attacks often so it is best to use the dash button wisely and when actually required to get away, If you get hit with its powerful pincer attacks it is fine to retreat for a bit and use a potion.

One of the most useful tips you need to keep in mind is to deal with minions as quickly as possible. Minions have low health but they come in big numbers. Evoker minions can overwhelm you and your party so it is best to deal with them first before focusing on the Evoker himself. As I mentioned, it is best to use ranged attacks against this boss. We suggest using the charged bow shots which will prove quite helpful.