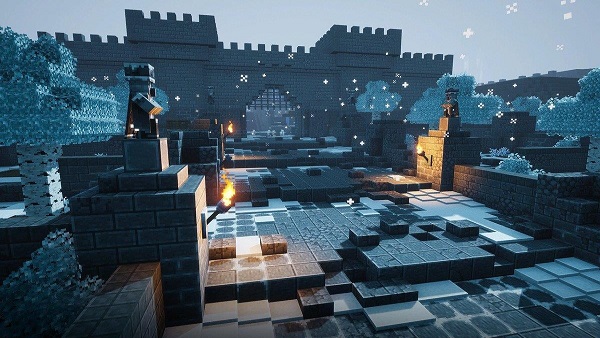 Creeping Winter has 5 new artifacts that have their own unique effects and locations. Artifacts also have multiple rarities.

The Ice Wand can summon large ice blocks that crush enemies. The artifact comes in Common and Rare variants in Minecraft Dungeons. Ice Wand damage depends on rarity but expects 5382 artifact damage, stun effect for mobs, and a 20-second cooldown.

Locations: Part of the loot pool in Frosted Fjord, Lone Fortress. You can also buy it from the Blacksmith.

The Buzzy Nest artifact, when placed in the ground, will make the bees spawn who’ll fight alongside you. This artifact comes in Common and Rare variants. The stats depend on rarity but expect something along the lines of 481 spawn damage and 23-second cooldown.

Locations: Buzzy Nest is part of the loot pool in Soggy Cave and Lower Temple.

The Soul Lantern lets players summon a creature in battle. The lantern comes in two rarities; Common and Rare. You can find the Soul Lantern artifact at multiple locations in Minecraft.

Locations: The Soul Lantern is part of the loot pool in Creepy Crypt, Cacti Canyon, and Underhalls.

The Enchanted Grass artifact lets players summon the enhanced sheep. These sheep are passive mobs and help out the player in battle. Enchanted Grass comes in Common and Rare variants in Minecraft Dungeons Creeping Winter.

The Totem of Soul Protection creates a square space around the totem to revive downed allies or the player himself. This artifact has two rarities in Minecraft Dungeons; Common and Rare.