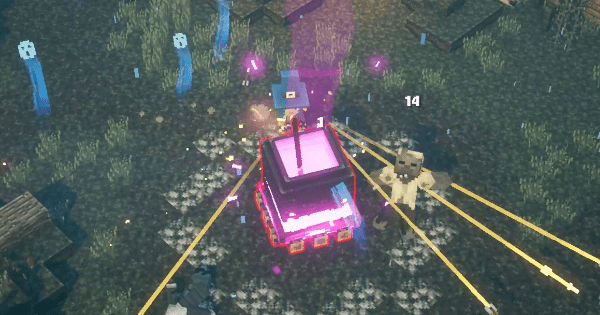 This Minecraft Dungeons guide will help players with how to defeat the Corrupted Cauldron. While this boss fight seems easy enough but, it doesn’ take long for players to get overwhelmed.

How To Beat Corrupted Cauldron

Players will face the Corrupted Cauldron at the end of the Soggy Swamp area. What makes it difficult to face this boss is the fact that it spawns enemies which can easily overwhelm you.

Unlike other bosses in Minecraft Dungeons, Corrupted Cauldron doesn’t move at all. It only attacks for spawning enemies and occasionally creating rings of fire around it.

What players need to keep an eye on are the unique purple slimes that the Corrupted Cauldron spawns frequently. These are the minions that pose the most threat to players. Not only they come in huge numbers but they can also throw projectiles at players that deal significant damage.

To clear out the minions, the best strategy players can use are the Area Of Effect attacks as they prove quite useful while clearing a group of minions. Follow this with an immediate attack on the Corrupted Cauldron before it summons rings of fire and pushes players back.

Given that Corrupted Cauldron spawns a lot of minions, the chances are high that players will get in trouble. In this situation, players can use the raised section of the arena to the North-East.

Here the minions don’t spawn and gives players a breather to recharge their abilities and replenish their health. If you can’t get to this position then target slimes as they often drop potions and food.

If you are using a ranged weapon, then use a crossbow rather than a bow. The spread of the crossbow will clear out groups of minions quickly compared to the bow. The crossbow itself deals with high damage when players use it on the Corrupted Cauldron at close range.

If players insist on using the bow as their weapon of choice then the best place to use it either at the top right or bottom left of the arena. Here not many minions will get in your way. If any of them get close, just melee them and return to the position.

However, players just can’t get close to the Corrupted Cauldron and not face any consequences. Players need armor with the Potion Barrier Enchantment. This will reduce incoming damage by 90% after the player consumes a health potion.

This allows players to tank a few hits and attack the Corrupted Cauldron and even withstand the rings of fire. For better results, use a faster melee weapon.

However, if you don’t have the Overpowered Enchantments, then retreat as soon as you see the pink flames. Keep following these moves and eventually, players will defeat the Corrupted Cauldron.

That is all for our Minecraft Dungeons guide with tips on how to beat the Corrupted Cauldron. For more on the game also see our How To Defeat Arch-Illager and How To Defeat Redstone Monstrosity.