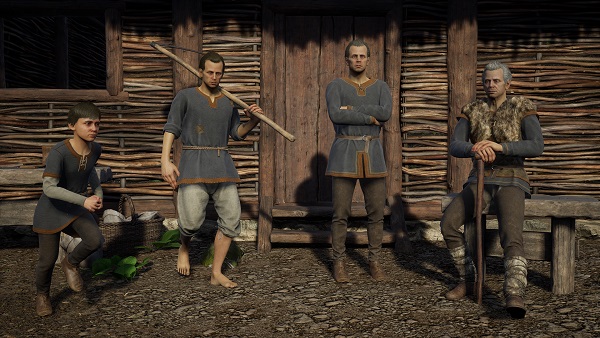 During your travels through Medieval Dynasty, you’ll come across a number of shopkeepers offering their services. Vendors in the game are specific to different towns and have fixed inventories. Due to this, you’ll probably need to travel a little when in need of a specific item. In this Medieval Dynasty guide, we’ve shared the locations of all the different vendors/shopkeepers that you’ll be able to find in the game

You’ll naturally come across a few of these merchants as a part of different quests. The rest you’ll need to find but that shouldn’t prove too hard.

Below, you’ll find a detailed list of all the shopkeepers in the Medieval Dynasty, their locations, and their complete inventory:

This is the town where you’ll begin your journey. There are a total of 4 vendors that you can find in this town.

Unigost
Unigost is the first NPC you’ll talk to in order to start the quest. Immediately after talking, you’ll receive a waterskin. Items in the inventory include:

Adelina
You’ll find her standing in front of her house. If you’re interested in buying seeds, this is the person you need to go to. Her complete inventory includes:

Jarogniewa
The last NPC in Gostovia is the tavern’s owner, Jarogniewa, who sells a variety of things – mostly related to edibles:

Borowo in the Medieval Dynasty only has a couple of vendors i.e. Falibor and his wife.

Falibor
You’ll easily find him standing outside his house. If you’re looking to buy tools and weapons, this is the man you need to visit:

Ida
Ida, Falibor’s wife, can be found sitting outside the house. The only thing she sells in the game are a bunch of eggs – that’s all!

There are only 2 shopkeepers in Branica – one in East Branica and the other one in West Branica.

Norbert
You can find Norbert in East Branica. These are the things that you can buy from Norbert:

Lubomira
In order to find Lubomira, you’ll need to head over to West Branica. This is what you’ll be able to purchase from the vendor – most of them are clothing items:

You’ll find the town of Rolnica on the far left side of the map. There are only 2 vendors you’ll find in the area. These are:

Nadar
Nadar is another merchant in Medieval Dynasty who deals in different kinds of seeds:

Tomira
This vendor specializes in animal goodies, meat, and eggs.

Another town with only 2 shopkeepers, both of whom you’ll come across during different quests:

Dagobert
This vendor is the village’s elder whom you’ll speak to as a part of a quest. He deals in different kinds of seeds and animal feed:

Matylda
She’s the wife of Dagobert whom you’ll speak during a quest. Unlike her husband, she deals in a variety of clothing items:

You’ll find two shopkeepers in the town. These are:

Teobald
If you’re looking for different types of iron tools, Teobald is the person you need to go to:

Gizela
Dealing in bows and different types of hunting gear.

Jezerica also has two vendors you can deal with. These vendors are:

Nieluba
Nieluba is all about food items that you can use to keep your HP topped up:

In the town of Hornica, you’ll be able to find a total of 3 vendors who deal in everything essential in the game i.e. food, clothing, weapons. On top of that, you’ll also find them all in the same house:

Jan
If you’re looking for weapons and iron tools, Jan should be your go-to person:

Helga
Helga is all about food items that you can carry during your travels:

Karolina
Lastly, we’ve got Karolina who is all about clothing items.

Finally, there are 2 vendors whom you’ll find out in the open – not specific to any particular town.

The first one is Rajmund who can be located between Rolnica and Branica. He lives with his wife in a small house and deals with animal feed as well as manure. The second one is Sambor whom you’ll visit during one of the in-game quests. Sambor deals in different hunting items, bows, arrows, etc.