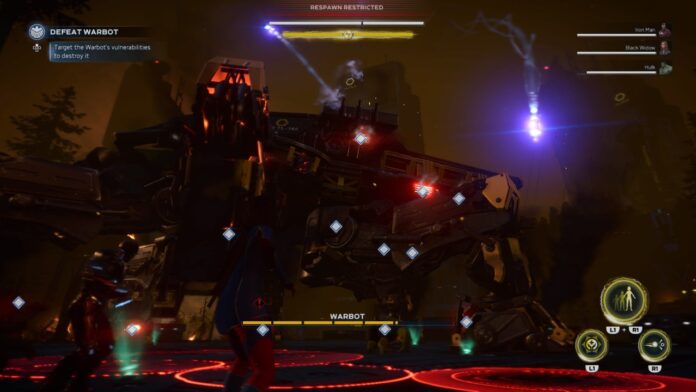 Marvel’s Avengers warbot boss fight is an interesting one. It is less tough and more annoying in my opinion. You won’t be facing the Warbot once, in fact, you face him multiple times over the course of the game. Warbot is Modok’s leading Avengers destroyer. And oftentimes it gets the job done, especially if you don’t know how to beat it. In this guide, we will discuss how to beat the Warbot in Marvel’s Avengers.

How to Beat Warbot in Avengers – Target Areas, Best Abilities Against Warbot

The Warzone is part of a Hero Story in Avengers and War Zone Missions. To defeat the Warbot you need dodging, predicting its attacks, and using the right tools against the enemy. The very first thing you need to do is attack Warbot’s body vents. This part of his body can only be attacked if your Avenger is in the air. This means that you can either go Iron Man or Thor to attack Warbot’s body vents.

After you are done with the body bents, the second weak point is the feet vents. At multiple points during the Warbot boss fight, the robot will overheat which gives you the opportunity to attack the vents on its toes or heels. When the Warbot overheats attack the red vents, keep hurting the vents but avoid being stepped on by the Warbot.

Target the Head When Warbot is Down

After you break all of its vents you can target its head. Destroying the vents will cause it to loss balance which gives the Avengers an opportunity to target its head. The Warbot will get back up after taking a certain amount of damage.

Target the Side Vents

In addition to its body and toes, Warbot has vents on its side as well. After you do enough damage to Warbot its weak point will change. The Red vents will appear on the right side which makes it vulnerable in that location. Look for a red light and use your ranged attacks to target Warbot’s weak points.

Once you deal with the red vents on the side of Warbot’s body, the final weak point will appear on its back as you enter the final phase of this boss fight. Multiple capsules will appear in its back which you can climb on and dispatch to finally beat the Warbot boss fight in Marvel’s Avengers.