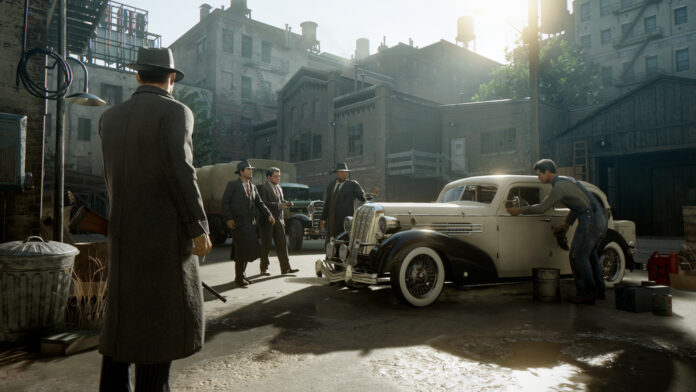 Mafia Definitive Edition PC is facing errors and issues like the Crash At Startup, Saving Failed, Corrupt Profile Save, Black Screen, locked FPS, and more. Here I have compiled a list of errors and issues that PC players are experiencing along with their fixes and workarounds.

Mafia Definitive Edition has launched and this is one of the best remakes of this generation. Not only the Mafia remake keeps what made the original to unique but, it also brings its own features. Cutscenes and dialogues have been rewritten and the pacing of the story is amazing.

However, the PC version of Mafia Definitive Edition is facing errors and issues like the crash at launch, the game not saving, Corrupt Profile Save, stuttering, locked FPS, crash at startup, and more.

Mafia Definitive Edition PC players are reporting that when they download the game it only downloads 715 MB and when they try to launch Mafia, they get an “Invalid App Configuration” error.

This can be easily fixed, go to your Steam library > right-click Mafia Definitive Edition > properties > Local Files > click “Verify Integrity Of Game Files”. Steam will then download a 35 Gb file and when that’s don’t the error will be fixed.

If that doesn’t work then restart your PC and then follow the steps mentioned above. This will fix the 715 MB download and Invalid App Configuration error with Mafia remake.

A lot of players are reporting that mafia Definitive Edition is crashing at startup or not starting at all. There are a number of reasons why this issue is occurring and here are the fixes.

If you are experiencing this issue on Windows 7 and 8, then you need to upgrade to Win 10 as the game doesn’t officially support Win 7 and 8 and won’t work on these OS.

Also, those of you are experiencing the Mafia crash at launch check the game’s file size. If it’s around 715 MB, then the game isn’t downloaded. Verify game files and Steam will download 35 Gb of files. This will fix the Mafia remake crash at startup issue.

If Mafia is launching from the launcher then you need to launch the game directly from its exe. Right-click the game in Steam Library > Properties > Local Files tab > click Browse Local Files. Launch the game from by double-clicking “mafiadefinitiveedition” and the game should launch.

Another reason for the game to crash at launch could be the lack of admin rights. Right-click the game > properties > Compatibility tab > check “Run this program as administrator”. Apply this change and the game will stop crashing at launch.

Mafia Definitive Edition PC players are reporting that they are experiencing Saving Failed or Corrupted save error. This error is preventing the game from saving in-game settings or corrupting their saves. Here are the fixes for Mafia remake corrupted profile save or saving failed error.

The first fix for these errors is to give the game admin rights. Right-click the game’s exe > properties > Compatibility tab > check “Run this program as administrator”. Apply and these save errors with Mafia Definitive Edition.

Mafia Definitive Edition PC players are reporting that the game is crashing in-game. There are multiple reasons for the Mafia remake to crash in-game and here are the fixes.

For those of you who are experiencing crashes while playing on Windows 7 or Windows 8, you are out of luck as the game doesn’t support these operating systems. You need to upgrade your PC to Windows 10 and the issue will be fixed.

Another reason for the Mafia remake to crash could be the use of third-party monitoring tools or software like MSI Afterburner. Disable any third-party software you are using along with Steam overlay and GeForce Experience overlay and Mafia Definitive Edition will stop crashing.

Some players are reporting that Mafia Definitive Edition freezes before crashing even on a moderate PC. The issue here might be the GPU driver, update it and do a clean installation.

If the issue persists, then the GPU might be the issue either it’s overclocked or not powerful enough to handle the game even on medium settings. If the GPU is overclocked then revert it back to its default clock speed even if its factory overclocked.

In case the GPU can’t handle the game or you don’t want to mess with the GPU clocks then players can cap the max FPS for Mafia remake. Open Nvidia Control Panel > Manage 3D Settings > Program Settings > select the game. Turn on “Max FPS Limit” and set the value to 30. This will cap the GPU to render 30 FPS max for the game. GPU and CPU load will drop and the game will become stable.

How to Skip Intro Video

Inro videos can be annoying as they can’t be skipped and Mafia Definitive Edition is no exception. However, there is a way to skip the intro video for Mafia remake.

According to players, when they launch Mafia Remake they get a black screen but they can hear the audio in the background. This can be fixed easily, launch the game and when the black screen appears, press “alt + Enter”. The game will go into Windowed mode and will start to display.

How To Unlock FPS

Mafia Definitive Edition is locked at 60 Hz and doesn’t officially support refresh rate above that. However, FPS can be unlocked for the game, and here is how to do it.

Download “3Dmigoto” from GitHub and extract all the files in the Mafia Definitive Edition folder. Replace the files if you have to. Then open the “d3dx.ini” file and look for “refresh_rate”. Remove ‘ ; ‘ from line start to uncomment it and then set your preferred FPS.

If you don’t want to go to these lengths to unlock FPS then go to this link. Players only need to put the “dxgi.dll” file in the game’s folder and the FPS will be unlocked. However, it might not work for everyone because this fix was for Mafia 3.

This is another error that Mafia PC players are experiencing. The fix for Missing XINPUT1_4.DLL is very simple. Go to “C:\Windows\SYSTEM32\” and copy the “xinput1_3.dll” file and paste it in the game’s install folder. This will fix the error.

Some players are reporting that even on Fullscreen mode with a freesync display, this can be easily fixed. Right-click the game’s exe > properties > Compatibility tab > check “Disable Fullscreen Optimizations” and hit apply. This will eliminate screen tearing.

Performance is a common issue among PC video games and Mafia Remake is no exception. Mafia Definitive Edition is facing performance issues like low FPS and stuttering. Here is how to fix it.

First, install the latest GPU driver. Open Task Manager and make sure there is no background process using too much CPU, GPU, or HDD.

Apply these changes and Mafia Definitive Edition stuttering will be fixed and players will see improved FPS. If the stuttering still persists then set Vertical sync to “Fast” and hit apply.

That is all for our Mafia Definitive Edition fixes for errors and issues like the in-game crash, Invalid App Configuration, 715 MB download, Saving Failed, Corrupt Profile Save, crash at startup, and more. If you are facing errors and issues with other PC games or your PC then also see our hub for commonly occurring PC errors and their fixes.