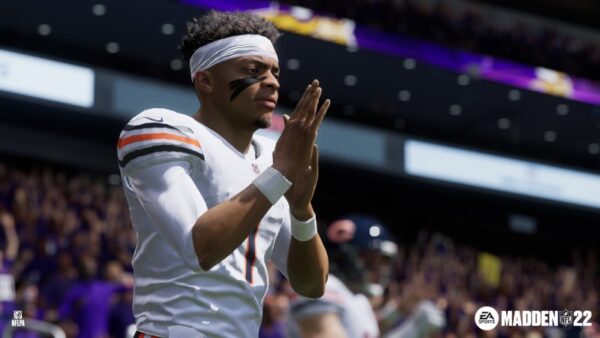 Like the few previous games in the Madden NFL franchise, Madden NFL 22 features Face Of the Franchise mode. This is a single-player narrative-focused game mode with the ultimate goal of being drafted. This Madden NFL 22 Face Of The Franchise walkthrough guide will help players with how to get drafted.

Madden NFL 22 Face Of The Franchise

The first time players start the game, they’ll create their avatar. Once players create their avatar, select Face Of the Franchise mode. Players will be asked to select the position they want to play. Players have four choices, QuarterBack, Wide Reciever, HalfBack, LineBacker.

Select your position and after that, select a class and physique for your avatar. Players have three call options

Select the college and players have a lot of choices. Once confirmed, players won’t be able to change class, physique, or college.

Road To the Draft

From here, the player’s journey being to being drafted. A cutscene will play where the player’s avatar will arrive at the Nike HQ. After that, players will have to complete the program. The activities in the program will depend on the playing position you selected. This is just a tutorial that players need to complete.

Completing the tutorial, another cutscene will play showing that a week has passed since the program began. Brandon will tell Jordan, your manager, that the athlete is still in the early stages. In the following cutscene, your avatar will land an endorsement deal.

After another cutscene, players have to complete a Pro Challenge. Players have to team up with superstar players to prove that they can hang with NFL elites. Complete the training and select the Extreme Efforts activity.

Selecting this activity will let players talk to the coach. This is where players will get to tailor their avatar to their playstyle. Players can choose Physical Development or Mental Focus. Choosing Physical Development, players can increase their stat like +5 Speed. Just select the boost you want.

Obviously, players will be wearing the Jersey of the college they selected when they created the avatar. This match is basically to test what you learned in training. Winning this match will be easy.

After this match, players get to play the College Championship. This match will be a bit difficult than the previous one, so be prepared. Win this match and players will be awarded the College Colors.

Next is the What’s Your Brand chapter in Road To the Draft. We are now back in the present with Jordan still hyping up the player avatar.

We then jump to the Week 4 of the Training Program. After that, Jordan will tell the players about a pick-up game in Hawai After that, the game jumps to Interview Prep.

Following the cutscene, players will be answering some questions. The answer you choose will determine how the interview unfolds. Select “We’ll Work Together” to leave a good impression. Players can choose any option they want, it won’t make much difference.

After this, the game jumps to 12 interviews in. Another question will be thrown at you about the College Championship. Select “Without A Doubt”. Then the game jumps three days ahead where players will get good news.

The game will then jump to whichever game you chose. Win the game and then we jump to the player avatar and Jordan talking in a cafe. Here, players have to make one of the following choices before the pre-Draft Workouts.

Once you make the choice, the game jumps to the Training Facility where players meet the Senior Assistant Coach. Players have to complete Private Workout. This will take players through some drills. Just complete these tutorials and a cutscene will play where the player avatar and the coach will have a one-on-one conversation.

Another cutscene plays where the players will get a phone call from the coach telling them that they have been drafted. The team will be different for every player depending on the choices made in the game till this point.

Following the cutscene with Jordan, players will then talk to the Coach and then with the Coordinator. Players can just select “Advance Week” to jump a week ahead this will result in “Pre-season Injury” for one of the teammates.

Depending on what happens, the coach will tell the players that no team will go through the Pre-season without any injuries.

After that, the player’s mentor, which is different depending on the team that drafted you, will tell players that the team needs them to be one of the leaders. Players can choose one of the following answers.

Depending on what you choose, the mentor will be different. He will tell players that the Worst Team will defeat the best Team and players can either Disagree or Move On. He’ll tell players that by this point, the games have been very easy and things are about to get tough.

Then players will talk to the coach about the situation. Players have two choices here.

Once you make a choice for your response, the match begins. Obviously, the goal is to win the game. At this point, Madden NFL 22 Face of The Franchise will increase its difficulty and it won’t be easy winning this match.

After the match, the coordinator will ask if players want to put extra time into Practice. Either select Yes or No. We selected No.

At this point, you have made it into the NFL. Players will get to play the season and have small interactions with other characters.

That is all for our Madden NFL 22 Face Of The Franchise Walkthrough with tips on how to get drafted. For more on the game, also see our Controls Guide and How to Throw Low Pass and High Pass.