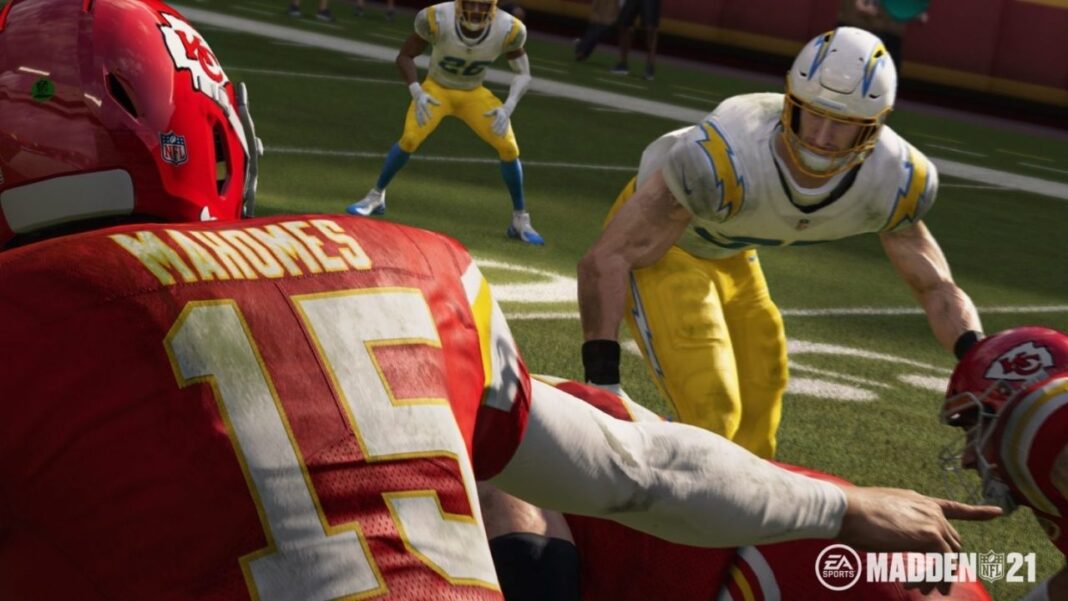 Madden NFL 21 Face Of The Franchise

Madden 21 Face of the Franchise starts with players making their custom character. The game has a lot of customization options, so it might take a while for players.

After that, players will receive a message asking “Hey what’s the address again?”. Here players will get the option to choose the type of their school. Select one option and then name the school and then enter the city name.

After that, players will have the option to pick a state, choose one and then players will be asked to choose the School’s Mascot. Choose the mascot that you want and the following are the choices.

After a small intro, players will meet Kelly Porter in a cutscene and then players will choose one of the two voices for their Madden NFL 21 character. Then the player character will talk to Regie about the interview.

How To Get Drafted

A flashback will play where players will receive their football helmet. After the cutscene, the game will take players through the tutorial. Complete the tutorial and cutscene will play with the coach and then Tommy will welcome the player to the team.

Another cutscene will play where the player will talk to Tommy about his frustrations about the recruitment offers and then they’ll meet the young Reggie. Reggie will try to get a quote out of Tommy but he will evade him and the player character will offer to answer some questions for the paper.

Here Reggie will ask some questions and players will have to choose one answer from the choices that Madden NFL 21 provides.

The first question will be about which QB style can the player can emulate. The following are the choices.

For my playthrough, I chose Lamar Jackson. Then Reggie will ask about the player’s personality on the field. Again, players will have to choose an answer from one of the following options.

For my playthrough, I chose “Win At All Cost” and the Bridges tells Reggie that he hates losing. In the next cutscene, Bridges will come to Tommy, who isn’t looking good and will tell Bridges that he has a Congenital Heart Defect as he was born with it. He asks Bridges to keep quiet about his Heart Condition.

Here, players will have another choice to make. Either support Tommy or convince him to skip the match. I choose the supporting Tommy and Bridges tells Tommy that he’ll keep quiet but doesn’t agree with it.

At the start of the 4th Quarter, the coach will bench Tommy as he isn’t playing any good and will send in Bridges to replace him. Here, players have another choice to make from one of the two options.

For my Madden NFL 21 Face Of The Franchise playthrough, I chose “Accept The Challenge” and then the match starts and of course, players have to play it. After that match, recruiting analyst Grant Simmons and will give Bridges his card in front of Tommy and he isn’t happy about it.

After that, Reggie will interview Bridges, 2 days before the State Championship. Reggie will aks about his biggest strength and players have to choose one answer from the following options.

For my Madden NFL 21 Face Of The Franchise playthrough, I chose “Avoiding The Pass Rush”. As Bridges answers the question, Tommy storms out of the coach’s office and the coach calls Bridges to have a word in the office, and then the game jumps to the Championship.

Play the match and one you are done with it, the game jumps to Bridge’s senior year with coach praising his style and Tommy comes in. Tommy tells that he is healthy and ready to get back in the game. Here, players have another choice to make:

I chose “Tell Tommy The Position is Filled” and Bridges tell Tommy that this is his team now. Tommy sits down and tells Bridges that making him a Receiver will make Bridges a better QB. The coach agrees and leaves with excitement.

Bridges tells Tommy that he wants to make things right and Tommy tells him that about the Midwest Prep Showcase event that every recruiter will be watching it. Tommy asks Bridges to let him do his thing as it’s his last chance to get any offers.

As the event is about to start, Snoop Dogg walks by Bridges and they have a little chat. Here players have another choice to make:

I chose to introduce Tommy to Snoop and he tells Tommy that he is a big fan and the match begins.

Finish the match and the game will jump three months ahead to the National Signing Day.

The first question to Bridges would be, what trait will give him an edge to the next level. Again, players have to choose an answer from one of the following options.

For my Madden NFL 21 Face Of The Franchise playthrough, I chose Oklahoma. Whatever you choose, Reggie will ask why to choose this particular team and Bridges will answer it on his own without any player input.

Now it’s Tommy’s turn to choose his team and he chooses the same team as Bridges. Both Tommy and Bridges hug when Tommy reveals that he wants to win back his position as QB.

After a small live-action cutscene, both Tommy and Bridges are sitting in front of the coach in their Junior Year. He’ll tell both of them that he has made a decision and here players have to choose one of the following.

As the conversation goes on, the coach will explain that he’ll rotate both Tommy and Bridges and then will make his decision. Of course, Bridges gets the first half and if he plays well, he gets to play for the second half. Otherwise, he’ll be replaced by Tommy.

After that, players will have to play a match. Complete the match and the game switches back to the Present where Reggie is interviewing Bridges and then we switch back to the flashback, several weeks after the match. Tommy and Bridges are both riled up.

Both of them have a bit of a heated argument. Here players have to choose either of the following reactions.

I chose “Lash Out” and Bridges will Bridges tells Tommy that he took nothing from him, all of this was because of his heart condition. Bridges quickly realize and apologizes but Tommy leaves.

Reggie tells Brides to go talk and clear the air with Tommy but he refuses. Then the game jumps to College Football Playoff Semi-Final. Win the match and the game jumps to the National Championship but Bridges isn’t starting the match instead, it’s Tommy.

Of Course, Bridges is upset but, one of the players makes him realize that Tommy is his brother and he should watch his back. Unfortunately, Tommy’s heart condition makes it impossible for him to play and Bridges has to take his place.

Win the match and then Bridges is in a hospital and the doctor comes in tells him that Tommy is stable. Bridges takes to the trophy to him. After a brief conversation, Tommy asks Bridges to come back next year and they can win the championship together. Here, players will have to choose one of the following.

I chose “Agree” and Bridges promises that he will come back. The game jumps ahead a bit, Bridges and Reggie are waiting for Tommy to welcome him back. However, the head coach comes before Tommy and tells Bridges that Tommy will be the starter for the next season.

After a bit of discussion, players have to decide what path Bridges will take and choose one of the following.

Choose “Switch Positions” and Bridges will stay. After that, Bridges has to announce which position he is switching too. Players have two options.

In my Madden NFL 21 Face Of The Franchise playthrough, I chose “WR” and the reporter will aks who’s game Bridges will mirror. Players have four options.

After this choice, another reporter will ask about Bridges’ greatest ability and players have the following options.

After the press briefing, a small live-action cutscene will play and then players will have to practice which will be based on what you chose, WR or RB. For me, it was practicing catches as I chose WR.

After a couple of cutscenes, the game jumps to NFL Scouting Combine. The Reporter will ask is Bridges is declaring himself QB for the draft and players have to choose one of the following answers.

Another reporter will ask Bridges if he hopes for a specific team to draft him and players have two options.

After the interview, Bridges will go to the NFL Combine but he has lost something and is looking for it. Rick Eisen shows up and Bridges asks him to lend him his cleats. After that, Rich challenges Bridges to beat his time and players have two responses.

Complete the combine and the game jumps to the NFL Draft where Bridges will be drafted by one of the teams. After that, players just have to play some NFL matches and answer some questions.

Best Choices To Get Drafted

The ultimate goal in the Madden NFL 21 Face of the Franchise mode is to get drafted. Here is what players need to do to get drafted based on my playthrough of the game.

Players have to win both games semi-final and the National Championship final games. They need to be a team player and choose the Team Player options whenever given the choice. Don’t leave for Draft when the coach chooses Tommy as starter QB just switch position. Make these choices and the players will be able to get their character drafted by an NFL team.

That is all for our Madden NFL 21 Face Of The Franchise Walkthrough guide with tips on how to get drafted. For more on the game also see our Franchise Mode Players Guide and QB Slide Guide. If you are facing issues running the game on PC then you can check out our errors guide.