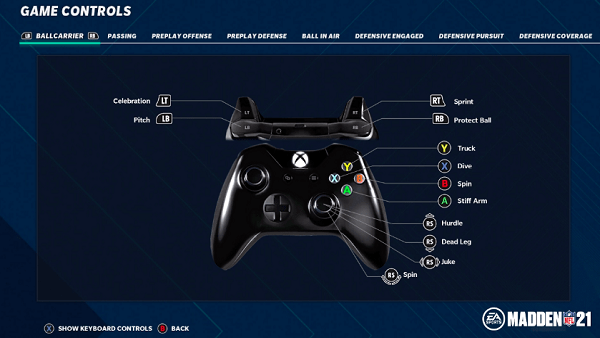 Madden NFL 21 players can play this year’s installment on PS4, Xbox One, and PC. The controls of Madden NFL 21 are different for each platform as well as previous installments. In this guide we will take you through offensive and defensive controls for Madden NFL 21. You can of course play the game on PC with a controller but it is definitely not recommended. Depending on what kind of controller you are using on PC, Madden 21 controls buttons will differ. You need to understand the new controls to create the best offensive and defensive playbooks.

Before the release of the game EA confirmed the biggest changes to this year’s Madden NFL game, the controls. Developers are making huge changes  which means even hardcore, long term fans of the series will need rundown of Madden NFL 21 controls.

All three platforms have different controls but they are not hard to understand. But if you need help you can check out the list of controls we have for you below.

The following are all offensive controls for Madden NFL 21.

The following are all defensive controls for Madden NFL 21.

If you need more help with Madden NFL 21 check out the Wiki page.