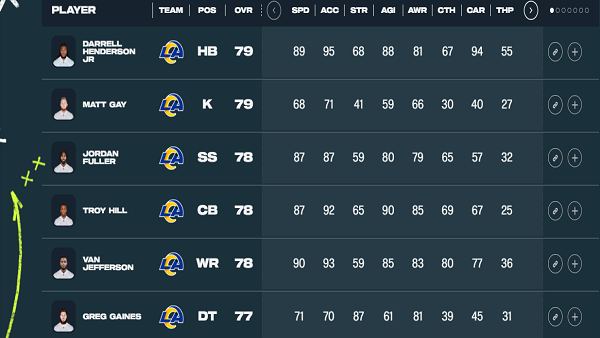 Madden 23 is out today, bringing some of the most popular teams and players back into the business. The ultimate team is back as well as Face of the Franchise mode. In total, there are 32 teams in the game, including Los Angeles Rams. In this guide, we will discuss Los Angeles Rams Roster and Ratings. Based on the information provided in this guide, you can easily know who the best and worst players are in Los Angeles Rams.

If you like to lead and want to play with one of the best teams in Madden NFL 23, then the Rams are a great option. LA Rams are the third-best team in the game with an overall 88. Unlike the Jaguars, LA Rams have multiple players over 90 ratings.

However, there are players who’ll often prove to be a liability in Madden 23. In LA Rams, these players are TE Matthew Orzech (25OVR), QB Bryce Perkins (54 OVR), and Coleman Shelton (53 OVR).

The aforementioned four players are the top ones in LA Rams, making this team one of the most effective in Madden NFL 23. Need more help? See Jacksonville Jaguars Ratings, How to Hurdle.