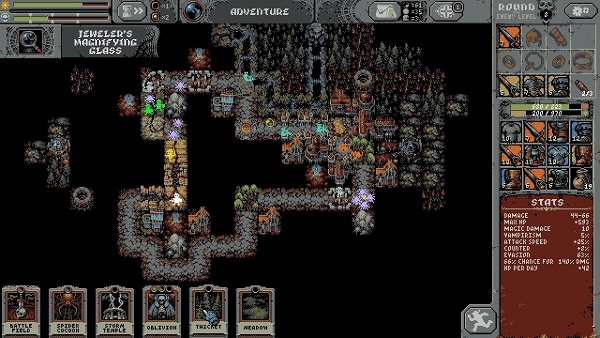 Bosses in Loop Hero work a little differently. Instead of finding them at the end of a level, Loop Hero requires players to fill the Boss Meter at the top-left corner of the screen in order to summon a boss. There aren’t a lot of them in the game but there’s a secret boss that can easily be missed. In this guide, we’ve detailed everything there’s to know about how to start the secret boss fight in Loop Hero.

Before we begin, do note that there are a lot of steps involved in summoning the secret boss in Loop Hero. The first thing that needs to be done is to complete the second chapter by defeating The Priestess. Aside from this, players will also need to have the Oblivion card as well as any five cards from Beacon, Bookery, Battlefield, Bloody Grove, Chrono Crystals, Roadside Lantern, Temporal Beacon, and Vampire Mansion.

Once everything’s been gathered, simply play through a loop as normal until there comes a curvy section of the loop. It’s in this section of the loop that players need to place all five cards from the list above on top of one another.

If done correctly, there should be a lot of blue sparks on the tile. From there, all that remains to be done is to place the Oblivion card on top of the blue sparks in order to summon the secret boss in Loop Hero.

Also read: Best Tile Combinations to Use in Loop Hero

Before doing so, however, try to have the best equipment available and a lot of HP since the secret boss can be a little frustrating to deal with. Defeat the boss, claim the riches, and onto another loop.

That’s all we’ve got in how to unlock the secret boss in Loop Hero. For more help on the game, feel free to check out our detailed Loop Hero wiki guides.