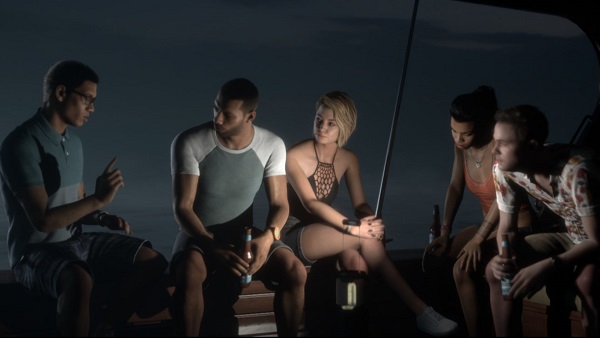 There are a bunch of creepy things that you can do in The Dark Pictures Anthology: Little Hope and one of them is collecting photos (just like Man of Medan) that trigger premonitions – a glimpse into the future about what’s to come. Collecting all of them unlocks the “A Complete Picture” trophy and also gives you a secret teaser about the next installment of this series. In this guide, we’ll walk you through the location of all pictures available in The Dark Pictures Anthology: Little Hope.

There are a total of 13 pictures present in Little Hope which trigger premonitions, 6 of them have a white frame and the other 6 have a black frame.

The final one is golden framed and this one is a secret teaser for the next installment in the series called “The House of Ashes”. Locations of these collectible pictures are described below:

The locations of all white framed premonition pictures are as follows:

Picture #1 – Deadly Omen
Go left down past the chain-link fence and search for a truck after Taylor opens the gate for Daniel and Angela. You’ll find the first photograph placed inside the bed of that truck. This one will remind players of previous titles as premonitions.

Picture #2 – Mercy
Look to the right for a wire fence, facing the police station, right before Andrew throws a rock at the window. You’ll find some barrels along with a framed picture lying on top of them.

Picture #3 – Ritual Blade
Players will follow Daniel and Taylor after the group is separated. After that happens, instead of the dumpster, choose the stairwell, and go through the room at the top of the stairs. You’ll find a hole in the hallway after going up the stairs. Make sure you collect the picture placed on a shelf in the room to the right before dropping down.

Picture #4 – Shackled
After the police station, when you’re playing as John and the objective to lead the students into town is assigned, look to the left to find a path. If you walk up a bit further, there will be a house there and the picture will be located on its porch.

Picture #5 – Exorcism
While playing as Taylor, when you’re hiding in the church, look towards the entrance. You’ll find a table next to the doorway with a picture lying on top of it.

Picture #6 – Demon at the Door
Once at the Historic Restoration site, you’ll notice a signboard to the left with a path behind it. Follow that path until you reach the picnic area and you’ll find the picture on one of the picnic tables.

Once you collect all 6 of these white framed pictures, you’ll unlock a trophy called “Glimmer of Hope”.

Black Framed Pictures
The locations of all black-framed premonition pictures are as follows:

Picture #1 – Familiars
You can collect this one just after the Black Cat Bar. Just head over to the picnic area and you’ll find several tables there. The picture can be found lying on the table at the end to the right side.

Picture #2 – Human Sacrifice
When you’re playing as Angela for the first time, you’ll notice a broken down car straight ahead and as you walk past it, an old house. On the side of the house, just behind the car, you’ll find a black-framed picture lying on a barrel.

Picture #3 – Like a Stone
This one can be found lying on a table when you’re transported back in time to 1692. Just cross the playground and you’ll find a narrow path, the table will be just behind a giant rock in this path.

Picture #4 – Dark Magic
When playing as Daniel, you’re given the task to find Taylor in the “Troubled History” scene. Another picture can be found lying on a table just straight ahead in the entrance-way of the museum.

Picture #5 – Voodoo Doll
While playing as Taylor, after the museum, walk a bit on the road and you’ll notice some picnic tables to the left. There will be another picture up for grabs on one of these tables.

Picture #6 – Pressed into Silence
You can collect the final black framed photo playing as John at the factory. The picture will be at your sharp left, on a box by the lightened green door.

Once you collect all of the black-framed pictures, you’ll get “Deathly Visions” as a reward.

Rope: The Golden Framed Picture
The last picture that you can collect in the game is gold framed and shows a terrifying teaser of an upcoming installment in the series as a premonition.

It can be collected in the final part of the game when you take control of Andrew after entering the burned down house. Just look straight ahead to the right and you’ll notice it resting on a wooden table. After you collect this 13th and final picture, you will earn “A Complete Picture” trophy.

These are all the pictures and their locations in The Dark Pictures Anthology: Little Hope. If you found anything missing or confusing, let us know in the comments below!