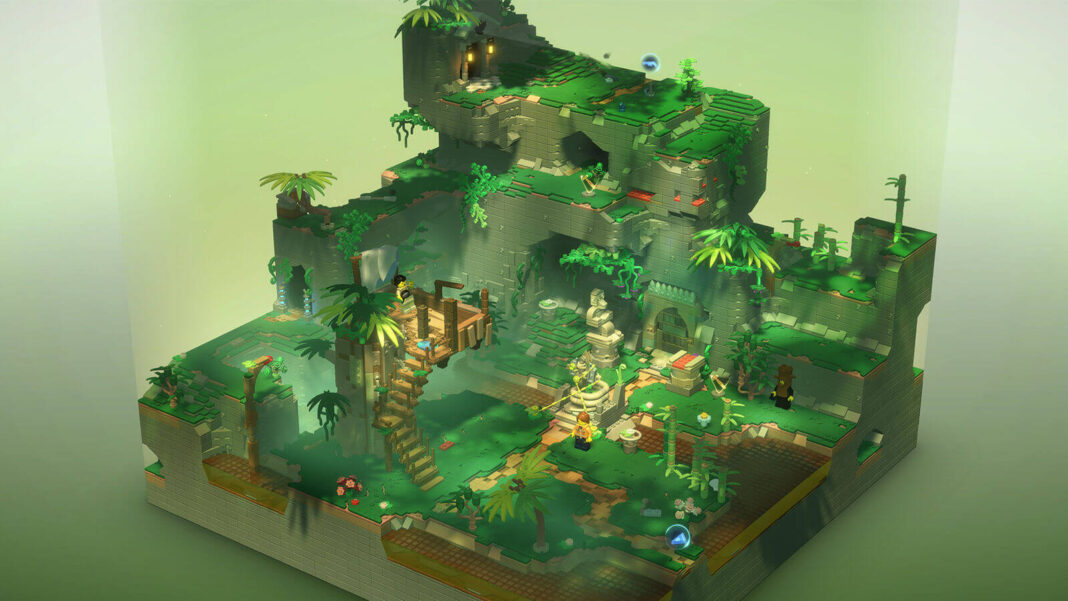 LEGO is something near and dear to my heart as a 90s kid and I am sure that there are plenty of you out there that have the same sense of nostalgia thinking about LEGO. Putting the pieces together and slowly watching them come together into something magnificent is something truly an amazing experience but is very difficult to turn into a video game. That is what LEGO Bricktales does really well.

As I mentioned before, converting the joy of playing with actual lego into a digital video game is a very tricky task. That is why we see LEGO versions of franchises such as Batman, The Hobbit, and even Starwars. That formula worked well in the past but after so many game it did start to feel a bit boring. LEGO Bricktales takes things in a new direction with a unique story and no iconic characters but a focus on building and puzzles.

The gist of the story is that you need to help your grandpa get his theme park up and running before it is shut down. Your grandpa happens to have a teleporter that can transport you to different places. These are the biomes that you explore. There is no action or combat but the game offers a really nice combination of exploration and puzzle-solving in the form of building with LEGO.

There are some cheeky dialogues that can keep you entertained if you are into that sort of thing and the whole story is pretty cute but I for one enjoyed the exploration and actual building segments more than the story. This is not a negative aspect keeping in mind that the puzzles and building are the core of the game. Yes, the story could have been better and a bit more captivating but I did not really mind it since I was mostly interested in what the next puzzle would be and what I would make.

Progress the game enough and you unlock new abilities. You can then backtrack and head back to previous locations to get collectibles that you could not access before.

Pretty Close To The Real Deal

Much like in real life, you will need to build different structures out of LEGO one brick at a time but there are no instructions that you get out of the box. The game does give you some rules to follow during the tutorial and as long as these are met, you are free to do as you please. So you can get pretty creative.

The only thing holding you back is the amount of LEGO pieces that you have at your disposal. The first time around, you will need to make something out of the limited number of LEGO pieces that you have. Once you have completed the puzzle you can then enter a sandbox mode which allows you to get as creative as you want to make your creation not only functional but aesthetically pleasing as well.

I for one did not feel like extensively testing the sandbox portion of the puzzles once I had completed the objective since I wanted to progress ahead in the game and did not really care about what my creation looked like. As long as it served its purpose and I was able to complete the puzzle, I was done and moved on. So there is a lack of incentive. This is an area that could be improved down the line.

During the building process, you can test your creation and make modifications accordingly. Robots test your structure for you and you are able to see the flaws without having to exit the building segments, which is nice to see. While this is a LEGO game you still need to use common sense in order to complete the puzzles and the laws of physics still apply. Just like they would in real life.

Not all things are great though, getting the right viewing angle can be tricky and a single misplaced LEGO piece can be frustrating to adjust. The camera can be annoying not only in the puzzle sections of the game but while exploring as well, making it tough to find all the collectibles and check out the whole extent of what the biomes have to offer.

While LEGO Bricktales is not exactly the same as physically building with LEGO but it gets really close to the real deal. Unfortunately, the camera does make things tricky and you can quickly make someone like me frustrated. I am sure this can be fixed down the line.

All things considered, this is a really fun and fulfilling game that we can recommend to all LEGO fans out there. LEGO Bricktales is unique and demands more creativity from the player and has solid gameplay. It gets an easy 7/10 from me.