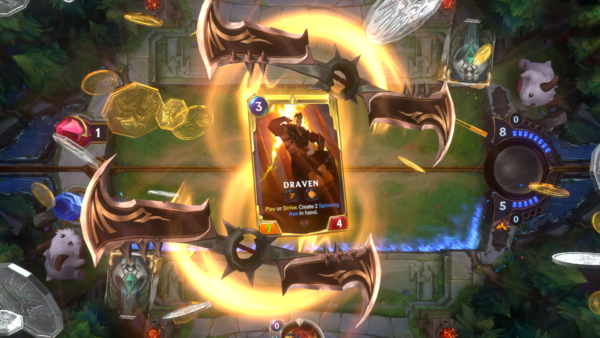 Legends of Runeterra is Riot Games new title after the successful League of Legends. The game is based on characters from League of Legends but it is wildly different from the popular MMO RPG. Legends of Runeterra is a card game comparable to Magic: The Gathering Arena. It also takes after Hearthstone. To play the game and do well, you will need some tips and tricks to help you boost your winning chances.

The game features a reactive interplay of spells and skills, similar to other card games. However, don’t expect everything to be the same in Legends of Runeterra. There are many fundamental strategies and gameplay differences and without their understanding, you will have a hard time.

Legends of Runeterra Tips and Tricks

There are multiple regions and many champion cards to choose from which means plenty of gameplay strategies for you to learn.  The number of champion cards is likely to go up once Riot Games spends more time working on the game. The path to victory in Legends of Runeterra can be complicated but not impossible.

Legends of Runeterra has 6 major regions Demacia, Noxus, Freljord, Piltover & Zaun, Ionia, and the Shadow Isles. Each region brings its own champions that players can choose. You can build your deck around various champions and their abilities, create unique strategies and playstyles. However, don’t rush off to building a deck just yet. You don’t have enough information at the start of the game and won’t be able to understand how each champion card works. The best plan is to start playing as much as you can. Start understanding how each card works before you start finalizing your build. To know how to build decks, we have that topic covered in another article.

Learn different champ combos and synergies for the perfect deck. The key to a stronger deck is knowledge of these aspects of Legends of Runeterra. For example, Freljord’s Anivia and Tryndamere both have a revive mechanic that makes it harder for you or your enemy to deal with. This aspect of Freljord’s Anivia and Tryndamere combined with the bombardment of wipe cards and AoE effects that deal extra damage is a great recipe to get the upper hand. Meanwhile, cards such as Ruination and She Who Wanders can often take down every card on the board; and they can both work really well with Anivia and Tryndamere’s revival ability.  When the board is baron you can use these champ cards to make matters worse for enemy Nexus.

Moreover, there are multiple cards in Legends of Runeterra that stand out from the rest due to their amazing stats and how easy they can be to use. There are 40 cards in a deck and out of 40, 6 are dedicated to two champions. It is up to you if you want to focus on one playstyle that is crafted around one champion or choose to pair with another cover your weaknesses. It is best to give each region a try to understand more about its cards, combos, and strategies.

One sure-fire way to boost your win rate is to make sure you level up your cards.  When you win your games in Legends of Runeterra without placing a card down, you will increase your win percentage if you focus on leveling up your champion cards.

Any champion card you pick has its own level up requirements and while some are easier to achieve, others are a pain. Often you will feel like putting down your champion cards when the enemy is attempting to attack your Nexus. But we suggest that you keep them out of the battlefield during the early stages of the match. Keep looking for opportunities and the right time to where you can achieve your level up requirements.

One common mistake is to use mana on filling out a hand with low-cost cards during the early stages of the game.  This is done to perform a few quick Nexus hits but avoid it. Each card costs different amounts of mana to play and you get more mana as each round progresses. Legends of Runterra allows you to store mana, a feature that is unlike other card games. This is useful if you keep your game-winning cards for later rounds. At a time you can store up to 3 mana and will only be used when you cast spells. Using mana you can put down some of the strongest spell cards so don’t waste mana.

There are daily quests in Legends of Runeterra. You can use this to earn XP, they go to your progression, unlocking more cards. However, you can reroll these quests and the XP for these quests roll different every time.

Realm Based Not Turn-based

Legends of Runeterra works differently from other card games. The game is not strictly a turn-based card experience, it is more like realms. You go around a table similar to poker and the whole round makes you wonder what move to make. Studying your opponent’s cards and predicting what moves they’ll make is key.