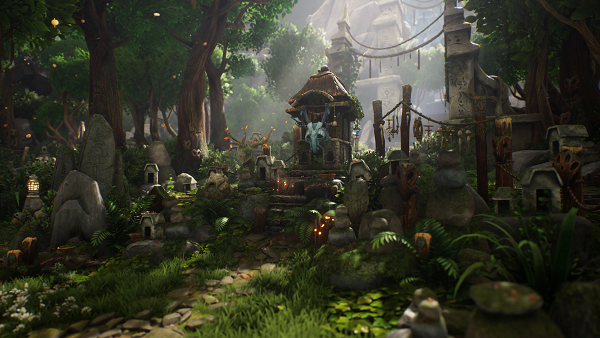 The fight against Kappa is quite unique in the sense that it is less about the boss itself and more about managing waves of adds that spawn.

During the initial phase, Kappa will continue to teleport around the area in three different areas – left, right, front. Do note that Kappa does not stay in one spot for more than a few seconds. This makes it hard to do any consistent damage. The idea is to focus on smaller adds in order to build the Rot Meter. Once it has been built, summon the Rot to stun the boss and deal some damage. Remember that the Hammer Attack can deal quite a considerable amount of damage to the boss.

At about 50% HP, Kappa will leap to a cliff and start hurling explosives at Kena. While it is doing that, focus on surviving and avoid getting hit. These explosives can take a chunk out of Kena’s HP and there is just a single healing plant nearby. Once the boss is done hurling these explosives, it will start to spawn stronger enemies. Just like the initial phase, kill these enemies to build up the Rot Meter. When it is built, summon the Rot to stun Kappa once more and deal damage.

There is not much to the fight other than this – build the Rot Meter, summon the Rot to stun Kappa, and do damage. Keep at it and the boss should die in no time.