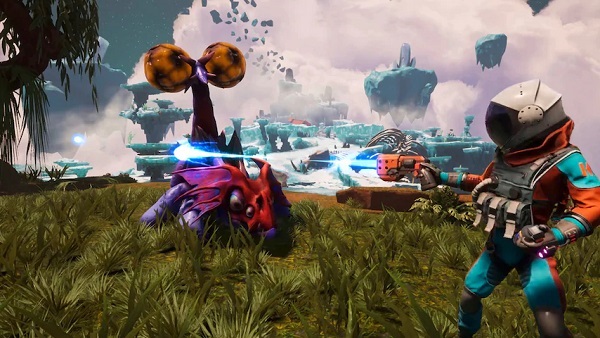 While none of the bosses in the game pose too big of a threat, they can still surprise you in a number of ways. One such boss that can do that is the Floopsnoot Matriarch. Our Journey to the Savage Planet Floopsnoot Matriarch Boss Guide will help you be prepared for these unpleasantries.

How to Beat Floopsnoot Matriarch in Journey to the Savage Planet?

As with other bosses in the game, try to upgrade your character as much as you possibly can. To damage the boss, you’ll need to shoot the yellow nodes on Floopsnoot’s body. To destroy all the nodes, you’ll need to carefully jump over platforms in the area.

You’ll also have to deal with ads flying around the area. These can whittle away at your HP in an instant so try to prioritize them whenever you can. Continue to do the same and you’ll complete the first phase.

The third phase largely works like the second phase but this time around, all the nodes will be blocked off. Repeat the same strategy as above and you’ll defeat the Floopsnoot Matriarch in no time.

For more on Journey of the Savage Planet, you can check out our Side Missions Guide, Tips and Tricks Guide, and Unlocking Grapple Guide.