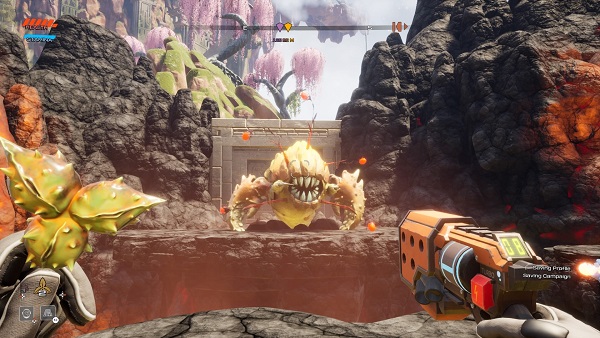 You reach Craglaw during the main campaign of the game. After you locate enough resources to craft the tether, you will have to beat Cragclaw in Journey to the Savage Planet. Taking this boss down you get you Cragclaw Defeated achievement. You can also unlock We came, We saw, We kicked its ass achievement by killing Cragclaw in coop mode.

At the lair of this monster, there are pillars between it and the player. The best way to handle this mission is to use those pillars to your advantage. You can use the pillars to avoid taking damage and while you avoid damage, you can attack the orange, glowing bulbs on its head. You can use Cragclaw’s head bulbs to deal damage to him, use Binding Bile to freeze Cragclaw in place to deal damage easily.

The Cragclaw throws rings of fire at the player but you can easily dodge them by jumping out of the way. After it fires three fire rings it will throw a projectile at your position so move to a different pillar. Use Orange Goo plants to recover your health. Cragclaw is not that hardest boss to beat in Journey to the Savage Planet. That’s pretty much it, but if you need more tips for the game, check out our tips and tricks guide.