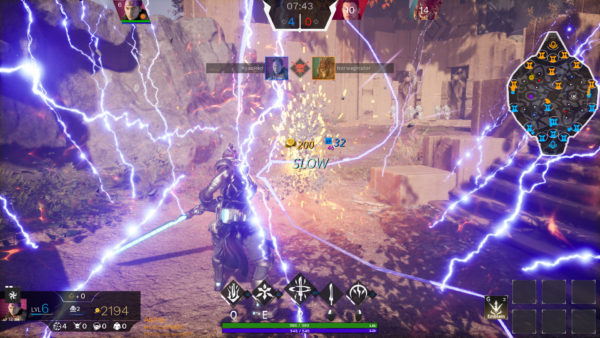 Strange Matter Studios has released its new title, Fault, on Steam early access. The game is in very early stages of development but it is already trending on Steam. The community seems to be behind it completely and part of the reason for that is its resemblance to Epic Games’ Paragon. Many want to know if this is Paragon 2 due to its uncanny resemblance to the 2016 title.

To answer your question, no, Fault MOBA is not Paragon 2 but it has an affiliation with Epic Games’ and its canceled IP. It seems Strange Matter Studios is trying to revive the idea of a 3rd person  MOBA game via this “Paragon Remake.”

Due to its 3rd person perspective Fault looks like an action game but it is heavily focused on MOBA mechanics. Players take control of their hero to push the lanes and take down towers and overwhelm the enemy. If you have played League of Legends this is exactly that but with a 3rd person view.

It is quite clear that Strange Matter Studios is trying to pick up where Paragon left off in 2018. There is still a community that wants to see Paragon make a comeback and this could be their dreams come true.

Fault MOBA has a variety of amazing heroes with unique abilities and a  deep customization system. Players are free to adjust and change hero abilities with perks to create their own custom builds. If you wish to give this game a try head over to Steam, Fault MOBA available to download right now for $14.99.

This would not have been possible without everyone here, we are grateful to have such an amazing community. Now that EA has launched we are excited to start the adventure to full release with you all! See you on the battlefield Fault fam!