Intel is trying to educate the press regarding AMD CPUs and their boost clocks. In a recently released slide deck, Intel included quotes from reviews that mentioned that AMD CPUs did not hit the advertised boost clocks on all cores. That might be true but it does not really affect a lot of people keeping in mind that the AMD Ryzen chips are more competitively priced when compared to Intel CPU.

It makes sense to pick the cores that are best and have them boost to the highest frequency possible. Boost clock is not something ideal to have on all cores at all times. You can check out the Intel slide that mentions AMD false marketing its boost clocks below: 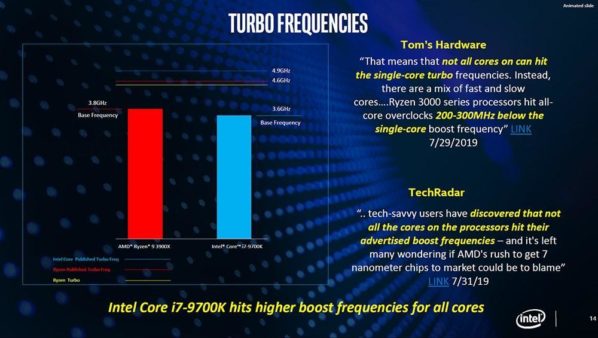 It is a pity that Intel is trying to fire shots at AMD this way. Intel is a bigger company and should know better. AMD does make fun of Intel at times but that is cocky marketing. These slides claim that AMD is trying to mislead the consumers when it comes to the boost clocks of their CPUs.

It is safe to say that moves like these will only hurt Intel’s image as a company and its credibility. As the industry leader, Intel should do a better job at leading rather than trying to fire shots at AMD. When a company resorts to firing shots at its competitor that is a signal that something is really off behind the scenes and that might be the case with Intel.

Interestingly, in 2019, Intel is still marketing clock speeds rather than concentrating on actual performance. Consumers want to see performance gains across the board, not just clock speeds and how long a CPU is able to maintain a boost clock.

On the bright side, it is interesting to see that Intel has actually considered AMD a competitor. This means that things are getting serious. A while back an internal memo from Intel did leak and Intel admitted that AMD Matisse could outperform the 9th generation Intel CPUs. It also mentioned that Intel had a “great strategy and great roadmap” to counter AMD. Firing shots at the underdog might be part of said strategy.

AMD has not commented on the matter at the time of writing but I am sure that CEO Lisa Su has a few things on her mind right now.