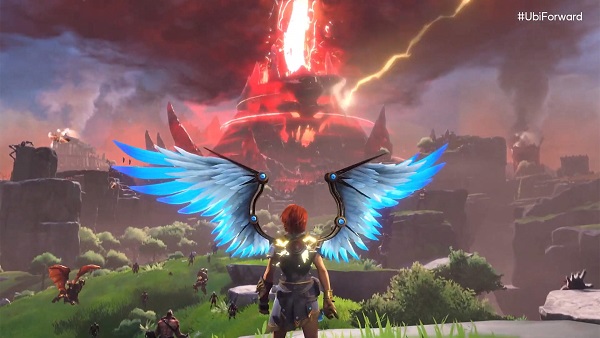 The puzzle is solved by placing the glowing orbs in the holes on the floor. However, there is only one Orb available at the puzzle location while others are hiding at nearby locations. Once you have all the orbs place them exactly how it is described on the wall in the puzzle area.

From the puzzle area take the stairs to the right and go up, turn right and you will see the first orb locked behind a shield. To bring down the shield you need to light the Brazier on top of the right pillar. Opposite the locked orb there is a platform with a golden disc in the middle. Go and stand on the disc and use your guided arrow ability to shoot the arrow into the fire and on to the unlit Brazier. This will light up the Brazier and unlock the first orb. Take the orb back to the puzzle area and place it in one of the holes, according to the front wall. If you place the orb in the right hole the wall will light up.

Take the same stairs up but go left this time. You will see a lever, pull it will bring down a shield in front of you to block your path but at the time open up the entrance to the orb. You can bypass the shield by jumping over the wall but you have to be quick as the door remains open for a short time. If it shuts down you will have to pull the lever again for another attempt. When you get inside the orb room you’ll find that there are in fact two orbs in this area. As you enter the front door pick up the orb and place it in the empty hole in front of it. This will open the front as well as the side door where another orb is waiting for you. Leave the first orb where it is and pick up the one behind the side door. Take the second one out of the area and place it on the puzzle platform. Now back to take the first orb but you will notice that as soon as you pick it up the door closes. Not to worry though, there is a button to the right side of the front door that will open it.

Remember the stairs we took from the puzzle area? Instead of taking those stairs to go, use another set of stairs on the opposite side to go down. As you head down you will see the orb to your left. To reach the orb use the breakable wall to the side of the building. Before you head in, pick up a stone and take it with you inside. The orb is sitting on a block, hit the block with the stone to push it back. Pick up the orb and place it in the puzzle platform.