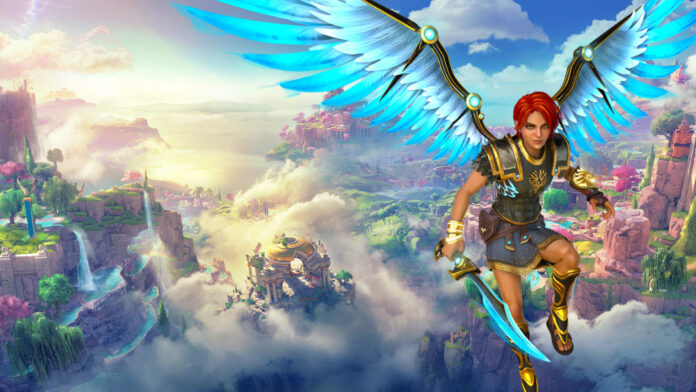 Immortals Fynex Rising in no way makes it easy for you to get your hands on Epic Chests. However, they are worth the trouble. Each Epic Chest has a puzzle associated with it and there are so many of them spread across the map. We have already discussed how to get all the Clashing Rocks Epic Chests so now let’s move on to War’s Den Epic Chests locations in Immortals Fenyx Rising.

The puzzle for this one is a bit complicated. There are three caves in this area and one of them has a chest in it. The middle cave as the chest inside but it is locked, the left and right caves have two puzzles you need to solve in order to get to the epic chest.

Right Cave: Inside the right cave there are discs on the floor and you need to stand on them by the following sequence.

Left Cave: Head inside the find the crack in the ceiling. Go through the crack and bring down the cube. Place the cube on the feather platform. Go down the stairs and to your right there is a crack in the wall and another feather platform inside it. Go to the platform and stand on it. The cube you placed should now be in direct line of sight. Pull the cube toward you and place it on the feather platform you are currently occupying. Now go to the first feather platform and the locked terminal should now be open. However, the lasers are blocking it. It is fine though, go through the lasers and press the terminal button. You will take some damage but it is nothing serious.

Go to the location shown in the pictures above and shoot arrows through the Brazier to light other braziers inside the epic chest room. You have to light the braziers in a sequence:

This is a night chest and all you need to do is visit the place during the night defeat the enemies and stand on the discs in the sequence shown in the pictures above.

The chest is inside a small temple-like location. There are two feather platforms on each side of the small room. Pick up rocks and place them on both platforms to unlock access to the epic chest room.

This epic chest is placed on top of an unreachable cliff. You need to start in the middle of the water where you’ll see some ruins with a level on top of one of them. Interact with the level to trigger a draft on the other slide that you use to glide your way to the top of a large column on the other side. Climb above the column and jump over to the epic chest.

Go to the location above and find the breakable wall on top of the cliff opposite the epic chest. Take out the cubes from behind the wall and throw it over to the other side on top of a feather platform inside the room. It is quite a difficult task so you’ll need multiple cubes. Thankfully, there are multiple cubes behind the wall you broke.

Get on top of the building that has the epic chest and you will find a large cube and a disc next to it. Push the cube right above against the red force field and go stand on the disc. Now pull the stone from the upper level and hit the cube to push it into the room, making it fall down the shaft. This will unlock the epic chest room.

From the location shown in the pictures, jump down from the ledge to find a cave with a hidden room. Stand outside and shoot two arrows to target two buttons inside the room, over the locked epic chest. This will open the cave door and you can walk inside. Stand on the disc to unlock access to the chest room and dash forward to immediately enter the room before the force field comes back down.

There is a platform in the middle of the water with a level on top. Pull the level to unlock access to the epic chest that is on the other side, on the beach.

Stand on the platform shown in the picture above and shoot through the lit brazier to light up the two braziers outside the epic chest room.

Go inside the room and stand on the disc to pull out the cube. Throw it on the upper platform behind you and climb with it. Pick up the cube and lookup for an opening you can throw it through while you stand on the disc. Once done, climb up to the next upper platform on the other side. Stand near the small brazier and pull the cube toward you to throw it down the opening in the floor. Now jump a platform and go through the breakable wall that has a level behind it. Don’t pull on that lever just yet. Climb above the lever room and pull the cube toward you until it reaches that red force field. Now go down and pull the lever we found behind the breakable wall. Now go back up and pull the lever on the upper floor to make the cube dropdown. You can now keep pulling the cube all the way down to place it on the feather cube on the ground floor. This will unlock access to the epic chest.

Go to the location shown in the pictures above and jump into the water. Find an opening to get inside the epic chest room. There is no puzzle tied to this chest.

Go to the location shown in the pictures and light the braziers in a sequence. Refer to the images to solve this one.

This one is pretty simple, go to the location shown in the pictures and stand on the discs you’ll find in the area. Shoot arrows and guide them to the buttons inside the structure ahead. This will unlock the chests. Refer to the images for more information.

Go to the location enter the temple, activate the lever, and climb above the platform to your right (next to the lever). Now shoot an arrow through the bars to hit the button on the other end while you stand on a disc. Now jump onto the upper platform and pull the lever inside a small room that should trigger a bunch of lasers outside. Come out of the room, glide to avoid lasers, and climb on the other platform where you’ll be standing on another disc. Now shoot another arrow and guide through the metal bars and hit the button. This will open access to the epic chest jump above the platform you are standing on.

The guide is being updated with images….