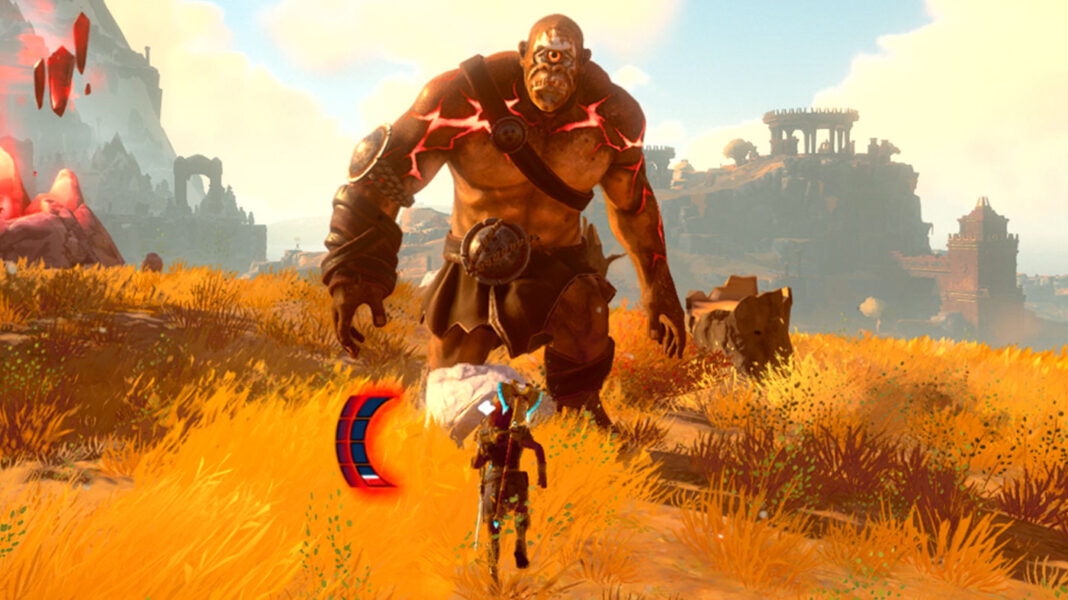 Immortals Fenyx Rising can best be described as a Legend of Zelda: Breath of the Wild competitor from Ubisoft. The game takes a few notes from the Assassin’s Creed series and if you have played AC: Odyssey then you will find similar elements but with a “twist”.

In Immortals Fenyx Rising you can climb anything if you have enough stamina. The gliding mechanic is something that you might be used to if you have played Legend of Zelda: Breath of the Wild or Genshin Impact. It is a nice way of traversing around the world and you can experience some breath-taking sights along the way.

The exploration and open-world experience is similar to pretty much any Ubisoft game that you might have played in the past. There is plenty to explore and much to do. You have puzzles and challenges to complete apart from the main storyline. You also have hidden chests that you can open in order to get additional rewards.

The issue with exploration is that you are never truly exploring or truly lost in the game, so to speak. The game holds your hand and what you will be doing most of the time is going from point A to B. The element of surprise is just not there. Farsight is going to mark all the points of interest and will tell you what to expect when you get to any of the locations. So the mystery factor is not there but that does not mean that all the activities in the game are not fun.

The vaults are one of the activities that are fun to complete. They can be very challenging at times and they will require you to unlock certain abilities in order to complete. Which is something that you can do and come back. The game is going to tell you if you are missing an ability that you need so that you can quit the vault and come back later on.

The skill tree and the abilities that you can unlock are not as elaborate as Assassin’s Creed games but they do the job and help keep the game light and breezy. The weapons are also limited but they do not break and you do not need to find new ones. Which helps keep the combat simple enough while also keeping it interesting.

The ways in which you can use the godly abilities that Fenyx has depends on you. You will find clever ways of using abilities while in combat and also when traversing the world. Abilities like Athena’s Wrath, when used properly allow you to do a triple jump and get to higher places quickly without using as much stamina.

While the initial godly powers that you get are pretty basic, progress the game and you will unlock some killer abilities that you can chain together to pull off some sinister moves. The combat is satisfying and timing dodges will slow down time so that you can land some critical hits.

Stealth is also an option in the game and you can deal some serious damage with a stealthy approach. But I did not find it all that useful apart from the initial stealth blow. Upgrade your gear and abilities and you will truly become a god and be able to bully bosses.

The storytelling is by far the weakest element of the game. The story is narrated by Zeus and Prometheus, and both have their own style but their jokes are not even funny and the tone of the story is never consistent. Both the gods rarely provide any insight regarding the story or the locations that you experience.

The narration is really off and the jokes can get cringy at times. I do agree that the game has a moral that we can all learn from and it is an interesting one but the way in which the dots are connected could have been much better.

Immortals Fenyx Rising is an impressive game that has interesting combat and decent exploration. The story is the weakest aspect of the game but if you are not interested in the cringy jokes and just looking for a refreshing game that you can jump in and kill some time then this is something that you might like especially if you like games like Zelda Breath of the Wild. This is an easy 7/10 game.

If you are interested in learning more about the game then you can check out our Immortals Fenyx Rising guides hub.