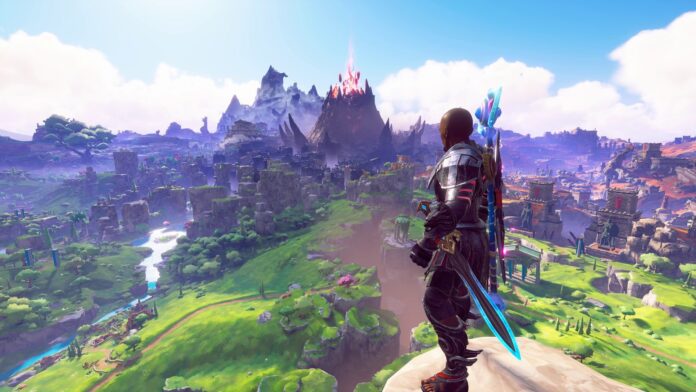 There are a series of Myth Challenges in Immortals: Fenyx Rising, which when completed net in Charon coins. These coins can later be used to buy or upgrade Skills and God Powers from the Hall of Gods. In this guide we’ll walk you through the Lyre Myth Challenges in the Clashing Rocks area of Immortals: Fenyx Rising. We’ll explain everything, including where to find them, how to complete them, and also what are their note sequences.

The first thing that you need to do in order to play the Lyre Myth Challenges is to find all the Small Lyres. You need to find all of them in order to remember their individual note sequences so you can then play them on the Big Lyre using your bow. The Big Lyre is located on the starting island, just a bit South East of the Messenger of God’s statue.
Now, for the Small Lyre, you can either find them on your own to get the note sequences; if you love adventure, or you can just use the sequences which we’ve already listed below. If you want to do otherwise and get the most out of the game, we’ve also explained where you can find all the Small Lyre and how can you complete them.

This one can be found on the East side of the island in a temple. Finding this Lyre is quite easy but getting the sequence isn’t as straightforward. There is a barrier to entry and in order to lower that barrier, you need to collect 4 crystal switches.

The first crystal switch is pretty easy to find, it’s at the front door on the North-Western side.

The second one is located on the North-Eastern side in the room with the barrier. At the entrance, climb over the doorway and you’ll notice a cracked wall. Use a heavy weapon on the wall in order to reveal an arrow target behind the grate. Then go outside and fire an arrow while standing on the raised section along with the Satyr statue, in order to lower the barrier and to get the crystal switch.

The third one is near the Pressure Plate on the South Eastern side. This Pressure Plate controls the entry barrier to a nearby building. You can grab a rock from the Satyr statue and weigh down the pressure plate with it. It’ll lower the barrier for your entry to the building. Head inside and you’ll find a small hole. Dive in and swim to the other side; you’ll find the crystal switch there. Also, this’ll open two side gates so you don’t have to soak yourself again.

The fourth one is located on the South Western side of the building and to get this one, you’ll have to light up a torch on a tree nearby. To light the torch, go to the nearby cliff and you’ll find a cave. Inside the cave, you’ll find some steps alongside the big structure, you can access a hole in the roof through those steps. Dropdown through the hole and you’ll find a grate to your left and a metal block behind that grate. Firstly, you need to move the block onto the pressure plate; it’ll activate the torch. Then you can use Apollo’s Arrow to light the one on the tree. Doing so will lower the barrier and you can grab the fourth crystal switch.

Once all four of the crystal switches are in your pocket, you can head straight inside to fight a Heavy Shield Soldier. After defeating the soldier, you can then access the Lyre along with an epic chest nearby. Also, the sequence for this Lyre is C-A-B-D-D.

This Lyre is located inside a small cave on the cliff and to get to this one also you need to get your hands on 3 crystal switches first.

The first crystal switch can be found right in front of the gate.

To get the second one, go through the tunnel and it’ll be in a small pool. If you’re having difficulty finding it, just look for the bubbles.

That’s all there is to know about the Clasing Rocks Lyre Myth Challenges in Immortals: Fenyx Rising.