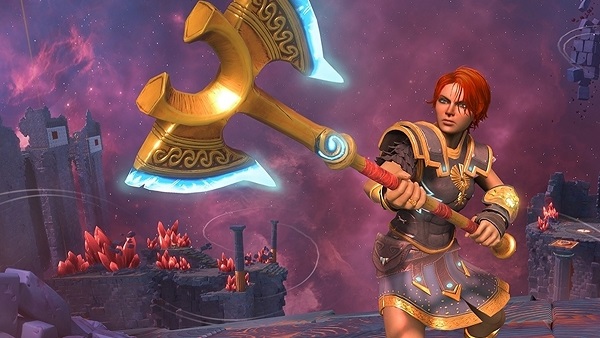 Epic Chests contains special items including potions and sometimes weapons and armor. Such chests are a great way to boost your progress in the game. In total, there are 12 Epic Chests in Clashing Rocks.

This epic chest is on top of a mountain where you’ll see a shipwreck. The chest is in the belly of the ship and it is very easy to spot. Near the chest, you will see a feather platform, collect the nearby cube, and place it on top of the platform to unlock the epic chest.

This epic chest is inside a hidden room tucked away in the center of the cliff. Refer to the images above for its location. You need to glide to reach the hidden room. To your right, on the ceiling, there is a crack which contains a cube. Bring the cube down and throw it as the destruction wall at the opposite end of the ceiling. Behind the wall, you will another cube. Now place both cubes on top of the floor platform to unlock the epic chest.

This epic chest location is in the middle of the four mountains. At the base of out of them is a secret room. Refer to the images above for the exact location. As you enter the room, climb into the opening in the ceiling to bring down a cube. The second cube is in the water. Place them both on the platform to unlock the epic chest.

This epic chest is a bit more complicated than the rest. What you need to do is activate a few terminals to bring down the red force field to the room that leads to the epic chest. Refer to the images above for the exact location of the chest. Stand on top of the platform and use one of the stones to create an opening on the breakable wall. Shoot through the space to hit the button that brings down the red force field. Interact with the terminal inside and then move on to the next. Climb above the golden building and bring down the cube to place on top of the feather platform in front of the building’s door. This will bring down the second red force field, allowing you to enter the room. As you enter locate a crack in the floor. Jump down and swim to the terminal you need to interact with. Come out of the area and head inside an opening in the mountain, behind a tree that has a brazier on it. Inside the room, go up the stairs and jump down the crack. Place the cube in the feather platform and then come out. Stand behind the fire pot and shoot through it to light the brazier outside that’s sitting on the tree. This will bring down the third force field that has a terminal behind it. Interact with the terminal and head over to the other side of the main building to interact with the final terminal that brings down the fourth red force field. Behind the final force field, you will find this epic chest.

Go to the location shown in the pictures above and find the scary, dead tree. Near the tree, you will find a platform, place two giant broken pillars on top of the platform and you’ll unlock the chest.

This epic chest is at the Observatory, go to the location shown in the picture and place rocks on the three feather platforms to open the gate.

There is another epic chest at the very top of the Observatory where you took your first flight.

This chest is part of the main story and can only be acquired when Hermes sends you to his secret hideout. The chest is inside the Hall of Gods.

Go to the epic chest location shown above and shoot an arrow through the opening on the other side of the cliff to hit the button that unlocks the epic chest.

This is a night chest so you need to either wait for night time or switch to night time from the menu. Go to this location simply kill the enemies guarding the chest to unlock it.