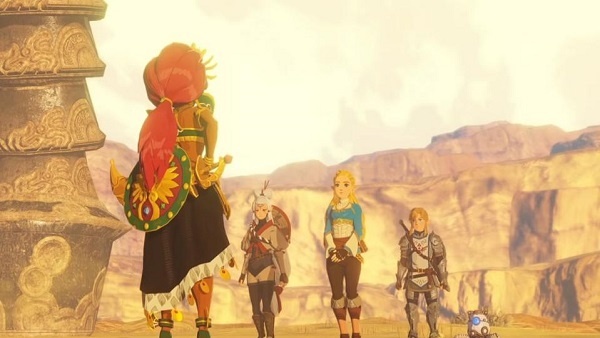 Hyrule Warriors: Age of Calamity The Battle of Hyrule Field

In The Battle of Hyrule Field, you will find a ton of Korok Seeds and a boss fight at the end. However, to reach the boss fight you need to go through the entire level first.

After you watch the opening cutscene you’ll take control of Link and jump right into battle. The entire section is a tutorial so simply follow the steps and learn the basics of Hyrule Warriors: Age of Calamity. You’ll learn about light and heavy attacks special attacks and unique actions.

In the opening section, you will face about 100 enemies and a brand new horde. You can keep killing enemies but to move onto the next section you must go to the waypoint. Reach the Moblin and lock-on by using the right stick. To beat the Moblins you need to dodge their attacks and use the opportunity to land a few hits. The red icons you see are weak points you can use to deal extra damage.

After you defeat the Moblin you’ll see three new waypoints. At each Waypoint, you’ll face a group of enemies. The outpost on the left should be your first target and then go to the outpost to the south to reach the objective outpost.

Move to the next outpost and don’t forget to use your special attack as well as a unique attack against enemies in this area. Capture all three outposts and reach the final section.

Head south and reach the three waypoints to the bottom right corner of the map. You will come across a Fire Wizzrobe in the area. Cross the wooden bridge and reach the Moblin territory.

The Bokoblin base has an explosive near the tower. You can shoot at the explosive to bring down the tower and reveal a chest. Fight off the enemies in the area but send your companion character to face the three Moblins to keep them distracted. Kill everyone to complete The Battle of Hyrule Field main mission in Hyrule Warriors: Age of Calamity.

And that’s all you need to know on how to complete The Battle of Hyrule Field. If you need more help with the game check out the Hyrule Warriors: Age of Calamity Wiki.