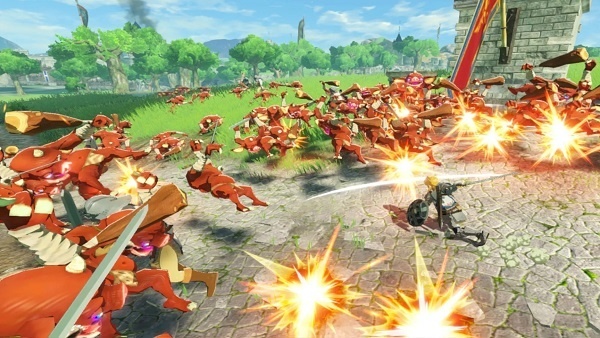 Hyrule Warriors: Age of Calamity Road to the Ancient Lab

Zelda and Impa are on your side as you face the horde of Bokoblins and the Moblin. Head south to pick up a few items. At this point, the Shiekah Slate will first activate Magnesis, an ability that allows you to swing around metallic objects. Meanwhile, the Stasis ability will freeze enemies.

Kill the nearby Ice Wizzrobe to get the Ice Rod.

Enter the outpost and take out the enemies until the Bokoblin appears with a hammer. Kill him and move on to the second outpost where the Guardian comes out of the wall. Ignore this enemy and follow Zelda toward the waypoint. Follow Zelda and Impa to reach the next outpost. A cutscene will start

You can reach the baby Guardian to activate the defunct Guardians. Reach their location by following the map. Play as Link and head to the waypoint and go north. Send Impa to the other one to make the whole process faster for yourself.

Switch to Zelda and get the attention of the second Guardian to lure it to the evil Guardian. Make it chase you to the red area on the map. Fight beast and win the battle to complete Road to the Ancient Lab main mission in Hyrule Warriors: Age of Calamity.