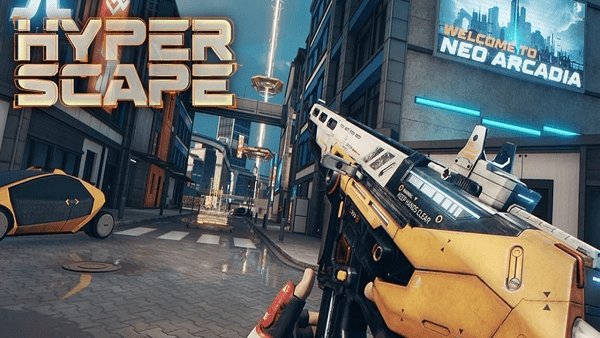 There are no weapon tiers, meaning there are no better versions of the weapons you are using. This allows you to focus on the game rather than looking for better weapons. There is a select list of weapons available in Hyper Scape. However, you can pick up duplicates of your weapons and fuse them together to upgrade. Some weapons see a huge boost in stats while others no so much but each fusion improves the weapon you are using. For example, Protocol V is a weapon that gets a huge upgrade when fused with another Protocol V. It does double damage when you fuse it with another Protocol V.

We do not recommend using this weapon as your primary. The D-Tap does a really sad amount of damage, the only good thing about this gun is the auto-aim system which makes it really easy to hit the enemy. So when can you use this weapon? Well, this battle royale game is extremely fast-paced so early on you might not be able to aim that well, having D-Tap’s auto-aim system will help you survive.

You can fuse D-Tap 5 times for magazine size increase and damage boost.

If you played Apex Legends than you will feel right at home using this weapon. It is quite similar to the Wingman hand-cannon. Riot One does close to as much damage as a sniper rifle. You may find it hard to make long-range shots with this weapon because it has no scope.

You can fuse Riot One 5 times to get a good amount of damage boost.

To get a huge edge in close range combat, get the Mammoth MK I shotgun. This weapon will get the job done thanks to its massive damage-dealing capabilities. But keep in mind that it can not one-shot an enemy with full HP. But its upgrades make it deadlier. The Mammoth MK I shots 13 pellets in a static pattern and since the spread is tight you can do good damage at medium range as well.

You can upgrade this shotgun to increase magazine size and damage at point-blank on the body.

The Ripper is for those who prefer SMG or an assault rifle. The weapon is similar to Apex Legends’ R-301 Carbine but it is comparatively slower with more recoil. Just like other weapons, this can be upgraded as well. Ripper does come with fall-off but you get additional accuracy when ADS.

Ripper can be upgraded multiple tines for increased magazine size and damage.

This is the only Sniper Rifle in the game right now so it is your only tool for long-range combat. Without any upgrades, it deals 75 damage to the head so it would take two shots to kill the enemy. However, if you manage to fuse it to the max Protocol V will turn into a one-shot kill when you hit the head. Protocol V is a hit scan weapon and one of the most powerful weapons in Hyper Scape.

The Hexfire is a minigun with an incredible rate of fire but it only does 4 damage per bullet. It also has a long reload time but no damage fall off. When you hip-fire the bullet spread is insane so keep things ADS at all times. Even with its cons Hexfire is one of the best weapons in Hyper Scape. It deals an insane amount of damage to highly mobile enemies thanks to the ability to deal with sustained damage.

This weapon can be upgraded 5 times through the fusion process on the following upgrade path.

The Salvo EPL is a grenade launcher that comes with 6 shells. It does good enough damage but nothing to write home about. However, if your enemies are pinned inside somewhere, this weapon is best for clearing out the rat infestation.

Skybreaker is similar to a rocket launcher but it shoots one large orb of energy at a time. The orb is a slow-moving projectile, you can use the Teleport to shoot yourself into the air before firing this weapon. The Skybreaker is really powerful when fired from above.

Unlike the Skybreaker, the Komodo fires fast-moving projectiles. Its blast radius does flat damage to the enemy or in an area of effect. The best way to use this weapon is to fire it from above to cover more ground and get an edge over the enemy. You can combine this with the Teleport hack.

These were all of the weapons Hyper Scape and based on the information we provided it shouldn’t be hard to figure which ones are the best to use.