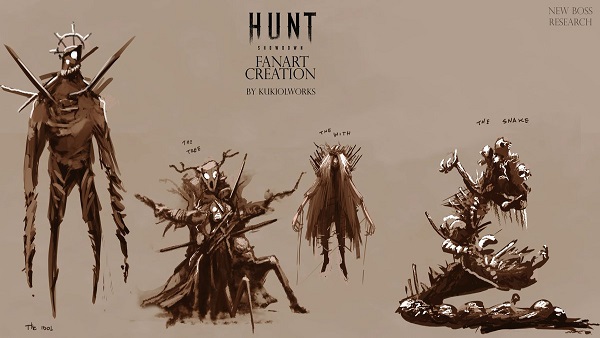 Hunt: Showdown is one of the most underrated games of this generation and while it is not available on consoles, it should be. More players need to experience what developers have done with this product over the last year.  For PC gamers who are just getting into this game, we have an amazing monsters guide for Hunt: Showdown.

In our Hunt: Showdown Monsters guide we will talk about monster weaknesses and strengths, and their general behavior. There is Meathead, Hive, Grunt, Armored, and Hellhound. Let’s start with Meathead and see what we can do to beat Meathead.

One of the monster types you will come across the Hunt: Showdown is Meathead. They have no real resistance to any damage-type but you can deal extra damage with by using rending and piercing attacks. Keep in mind that it spawns leaches as sensors.

What Do We Know About Meathead?

Roaming around the open world of Hunt: Showdown you will rarely come across Meathead. Compared to other monster types Meathead isn’t easily found. You can sometimes spot them by large barns and houses. They don’t exit their spawn area unless attacked by a hunter. So if you decide to engage Meathead, make sure you have an idea.

Meatheads are deaf and blind so they run around like a headless chicken trying to locate the hunter. When Docile they will walk short distances and leeches fall off them.  This is how they locate hunters as leeches act as sensors.

Meatheads are hard to take down and if they catch you expect massive damage as they hit hard.

The Hive can be found ear the strategic points such as big buildings, boss areas, resupply areas, clues. As the name may suggest, The Hive can unleash bees that deal poison damage. Other than this they have no attack method.

We will look at the strengths first.

Let’s look at the weaknesses

You can find Armored monsters in towns and inside jungles. Due to heavy armor, they move slowly and are a big target. If you are trying to pass the area patrolled by one of these monsters make sure you have plenty of bullets on you. If there is a way to avoid engaging with it, avoid!

Fire is an effective method to put down Armored quickly. Otherwise, you will need plenty of bullets to kill it. Also, keep in mind that while armored enemies are slow, they do jog fast when aware of nearby hunters. It has a strong melee attack and it can be hard to escape Armored in close-range.

Let’s talk about the strengths first.

The most common type of enemy you will face in Hunt: Showdown is Grunt. They don’t have a set area of operation which means they hang around pretty much everywhere. Often times Grunts wield weapons and molotovs that can set hunters on fire.

Grunts can be killed with a gunshot or knife to the head.

Here are the strengths.

Hounds are found hanging around inhabited areas and present no specific weakness to any damage type. It a fast-moving enemy but not that hard to kill.

This was our Hunt: Showdown Monsters guide. Hope this helps you deal with monsters in the game. Also, check out our Hunt weapons guide.