Home Guides Valheim How to Use Wishbone in Valheim 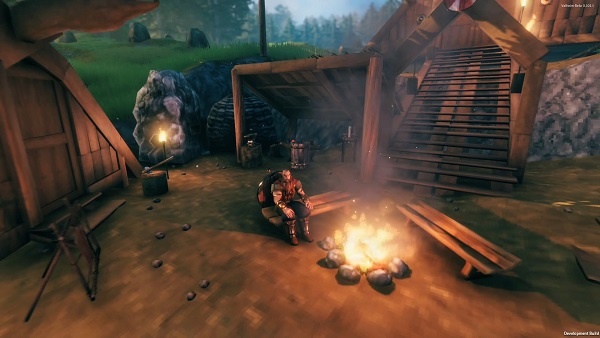 Wishbone is an item in Valheim, which will help players differentiate between the secrets of life and death. Players are always looking for an edge, which they could by having Wishbone in their inventory. Wishbone basically makes finding secrets easier, for instance when you are near a secret treasure, you will notice green particles around you, accompanied by a ding sound, which increases as you move closer to any secrets.

Wishbone is dropped by the gargantuan beast Bonemass in the swamps. Considering Valheim’s strategical and methodical nature, players will have to prepare before going toe to toe with this boss, which is the third boss in Valheim. After you eat the Bonemass, you will earn the wishbone and get a prompt message stating the purpose of the Wishbone.

To kill the Bonemass you will have to spawn him first by walking up to the massive skull lying on the ground, and it will appear near you. You then have to kill him, and after vanishing in the void it will drop the Wishbone that you can pick up and use afterward.

Killing Bonemass is tricky and a difficult task, so we recommend you use your best weapons to inflict maximum damage onto the Bonemass and his little slimes that are spawned by him during the fight. You will mainly have to focus on health regen and poison resistance or you won’t last long against this monster in the swamps.

Bonemass can be damaged with iron maces and other relative weapons. Stagbreaker is one of the best weapons to use against the Bonemass as it does maximum damage. Poison resistance is important as it will cut off any damage dealt by Bonemass by more than 70%.

Finally, the Bonemass monster is defeated and you can collect your reward, the Wishbone, which he hid in his belly for the longest. You can equip it whenever you want and go on a treasure hunt and it will surround you with green glowing particles, which will let you know that there’s some hidden secret nearby and as you walk closer to the treasure, the glowing and the ding sound will increase.

This was all you needed to know about finding the Wishbone and defeating the Bonemass in Valheim. For more help on the game, feel free to check out our detailed Valheim wiki guides.