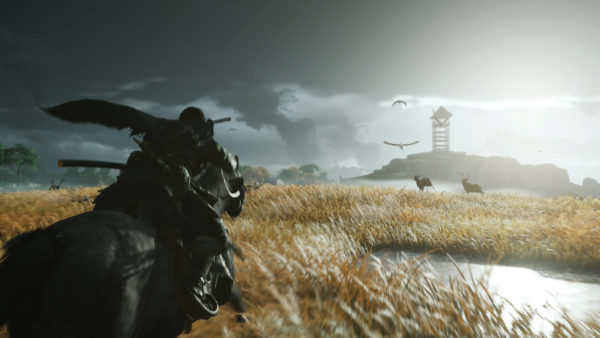 Ghost of Tsushima is a true Warrior Samurai’s game as it not only tests your combat skills as a Samurai but also makes you use the ways of the Samurai. By now you already know that there is no real waypoint in the game. Navigating in Ghost of Tsushima is unique as you must follow the Guiding Winds to reach your destinations. But in addition to having the Guiding Winds, there are Golden Birds that guide you to certain locations. The Golden Birds are a similar mechanic to the Guiding Wind. The later only lets you reach different locations, objectives, and undiscovered locations but to truly find the secrets of the Island, you need the Golden/Yellow Birds of Ghost of Tsushima.

While roaming around in open-world Jin will come across Golden Birds multiple times. In fact, be on the lookout for them as you play. Once you see these birds, follow them to wherever they may take you. They are a sign of a secret nearby which can be a hot spring location among other things. Of course, it won’t always be a hot spring. The Golden Birds reveal secrets that are off the beaten path. Combine the Guiding Wind and the Golden Birds to explore the world of Tsushima and reveal its hidden secrets. There is still plenty of exploring in the game and the birds are a match made in heaven for those who like to explore every bit of the open world, look under every rock, and visit new areas.

The birds are easy to follow, still, often you may lose them. If you do, simply look around to see if you missed something.