Home Guides How to Use Bagpipes in WWE 2K Battlegrounds 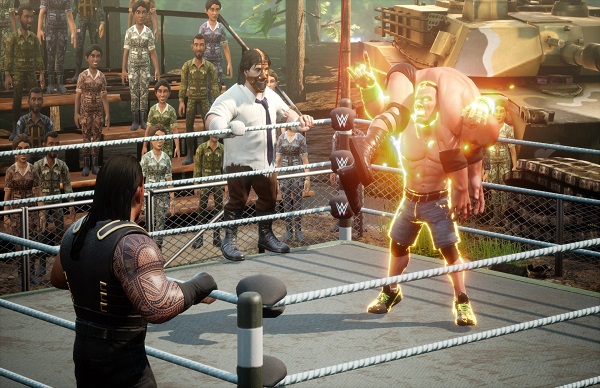 WWE 2K Battlegrounds introduces many new animations, most highlighted of which are the interactive options exclusive to different arenas in the game. You can smash cars on your opponents, feed them to crocodiles, play bagpipes to drain their energy, and much more. In this guide, we’ll take a look at how to use bagpipes to drain your opponent’s energy.

It’s time again to invite your friends and family so you can brutally smash each other in and outside of the ring again. 2K Games took a totally different and fresh approach this year after receiving a considerable amount of negative reviews about their simulation-based release “WWE 2K20” last year. Their new release “WWE 2K Battlegrounds” abandons realism for an over the top, colorful, and chaotic arcade-style gameplay.

After the fight starts, just keep an eye on the bagpiper. If the match goes on for long, the bagpiper will fall asleep. After he’s asleep, Z’s will appear over him and you’re good to go. Now you’ll be able to interact with him and snatch his bagpipes.

To do so, simply move towards the upper left part of the arena outside the ring. When you’re close enough to him, an LB sign for Xbox and an L1 sign for PlayStation will appear. Press the button and voila, you’ve got the mighty annoying (to the opponent) bagpipes.

After to snatch the bagpipes, you can play the instrument to drain your opponent’s energy, wearing him down for an easy submission or pinfall.

And this is how you can use bagpipes in WWE 2K Battlegrounds. Be sure to let us know if you found anything missing or confusing!