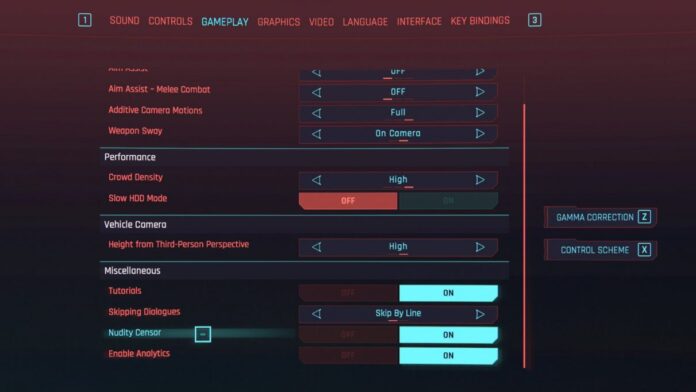 Cyberpunk 2077 contains a lot of mature content; violence, bloodshed, and a great deal of nudity. While many people are ok with that because the game was advertised as an 18+ game, some people may find it annoying, especially the nudity bit. You can turn it off though and learn that you’ve come to the right place. In this guide, we’ll explain how to turn off nudity in Cyberpunk 2077.

How to Turn Off Nudity in Cyberpunk 2077

To turn off the nudity and censor away the naughty bits in Cyberpunk 2077:

1) The first thing that you need to do is head over to the Main Menu of the game.
2) From the Main Menu, click on the Settings option.
3) Once in the settings section, click on the Gameplay tab.
4) Scroll to the bottom of this tab and you’ll find the Miscellaneous section.
5) In this section, there is a Nudity Censor option which you need to turn On.
6) After you’ve toggled the Nudity Censor On, you can then load a save or start a new game.

What will the Nudity Censor do?

The Nudity Censor will prevent anything nude or even slightly inappropriate from appearing on your screen, hence sparing you from the embarrassment if you on a family PC or your system is stationed at a place where a lot of people pass by. It’ll cover the privates with short garments during all sex scenes and even during character customization.

Even when you’re walking down the street and see a stripper dancing behind the glass, he/she’ll be wearing a sweatshirt and trousers instead of short clothing. To conclude, it’s quite a useful setting to personalize your Night City experience and can help you to play the game the way you want to play it.

That’s about everything you need to know on how to turn off nudity in cyberpunk 2077. If you are interested in learning more about the game then you can check out our guide on the best mods in the game. For more content, check out our Cyberpunk 2077 guides hub.