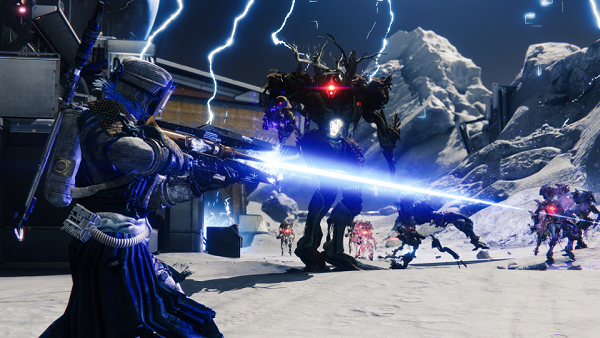 While on the Moon in Destiny 2 Shadowkeep, you’ll often come across Vex invasion portals and their Gate Lord bosses. To be more specific, they appear in one of Archer’s Line, The Hellmouth, or the Anchor of Light shortly after a Public Event – look at the sky and search for a little lightning. The entire point of the event is to defeat the Vex Gate Lords and close their portals but like other Public Events in Destiny 2 Shadowkeep, you can turn the Vex Invasion Event heroic and summon a hidden Vex Overlord boss to receive Powerful Rewards.

Before we start, the first thing I should mention here is that summoning the secret Vex Overlord boss is a completely random chance. It’s never 100% (if it’s, we don’t know about it yet) and you’ll have to keep going to be able to find it.

If you do manage to spawn it, you should see a message in the bottom-left corner of the screen saying, “A Vex Overlord has launched an attack.” But the question is, how do you spawn it?

How to Spawn Vex Overlord?

The Vex Overlord is a giant Hydra with a lot of HP and loads of adds. Whisper of the Worm and Izanagi’s Burden coupled with Divinity works really well.

If you manage to defeat the boss, you’ll be rewarded with a Powerful Reward – it should be up +3 to +5 over your maximum Power Level. You can only claim it twice per week per character.

On top of that, there’s a Triumph that requires you to defeat Vex Overlords in the three locations mentioned above.

This is all we’ve got in our Destiny 2 Shadowkeep Heroic Vex Invasion Event Guide. For more help on D2 Shadowkeep, be sure to check out our Divinity Exotic Guide, Heroic Public Events Guide, and Garden of Salvation Raid Guide.