Home Guides How to Rush in Age of Empires 3: Definitive Edition: Rushing Strategy... 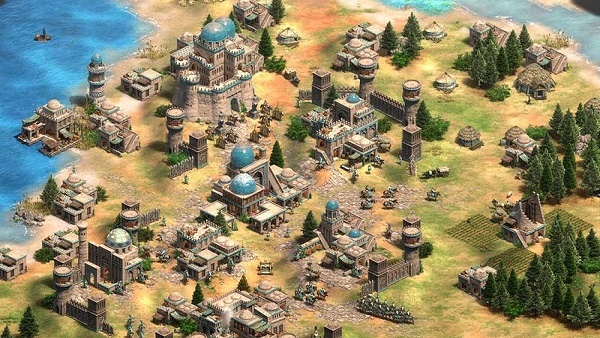 How to Rush in Age of Empires 3: Definitive Edition: Strategy, Pros, and Cons

Start your game by collecting resource crates such as food and then focus on wood. Use your food resources to create settlers in Age of Empires 3. Put all of your new Settlers on hunts and set the gathering point for the TC hunts. The next step is to queue your settlers until you have around 10-11 queued. Ship 3 of your Settlers as the first shipment or with Eastern Civilization, ship 300 food.

Move 7 Settlers to the wood while the rest go to food while aging. Once you reach the Colonial Age, construct 1-2 barracks near the enemy base and start to queue heavy infantry such Pikeman and light infantry like Crossbowmen. You can ship 700 Wood for a powerful rush or ship infantry for a faster rush in Age of Empires 3: Definitive Edition. Make sure to keep training your Settlers and pul all-new Settlers on food. Attack the enemy at 5-6 minutes and keep training heavy and light infantry.

Add your new soldiers to the existing army and keep the pressure on your enemy.

Rushing the by far the easiest way to attempt and rushing early can actually counter an enemy’s rush if they plan one. It can end a match quickly and attacks take place on your terms. Moreover, if the rush doesn’t go well the attack can be canceled early with minimum risk. If you manage to execute a rush properly you can actually do really well in Age of Empires 3: Definitive Edition. Rushing works great on smaller maps.

However, the problem with rushing in Age of Empires 3 is that you can face a counter-attack if you fail. You will be at a tech and economic disadvantage if you mess up a rush. If you take too long to set-up a rush it will make it impossible to get it right. If you playing in a team game it can prove to be a suicidal move. If your enemy decides to rush you will be completely open.

That’s everything you need to know about how to rush in Age of Empires 3: Definitive Edition.