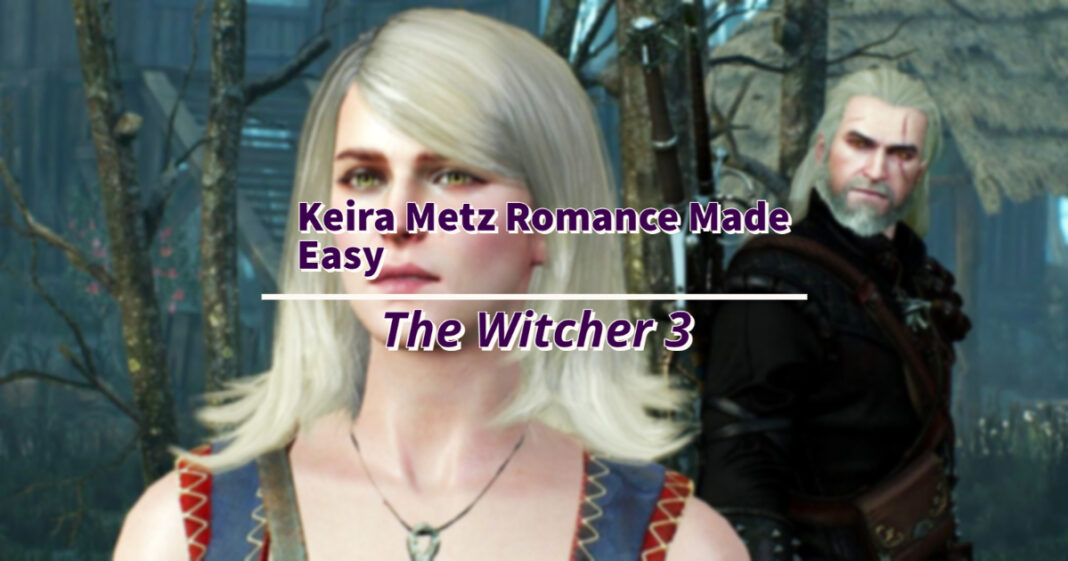 One can certainly call Geralt a philanderer, as he had many flings in The Witcher 3 despite his undying love for one woman. His casual hookups are evidence enough that loyalty was not high on his agenda. Besides Yennefer and Triss romances, Geralt gets a chance to spark romance with another sorceress, Keira Metz.

Note: Unlike Triss and Yennefer, you can’t have a proper relationship with Kiera Metz. The relationship doesn’t go beyond sex between Geralt and Keira Metz.

When you kick off your mission to locate Cirilla Fiona Elen Riannon, aka Ciri, Keira Metz is the first person you will encounter. This chance of starting a romance with her is exclusive in this game – so make sure to seize it. Before any close interactions can occur, you must first help her on each of her missions, and during the last mission, “A Favor for a Friend,” you will get the chance to do romance.

Geralt is tasked with an adventure entitled “Hunting a Witch,” in which he must seek out the help of sorceress Keira, located in Velen, Northern Temeria, to locate Ciri.

You’ll soon meet a sorceress as you explore the Elven ruins near Lake Wyndamer during your “Wandering in the Dark” quest. This encounter will trigger another mission: “An Invitation from Keira Metz” – and don’t be fooled by its title! Don’t expect this to be some love story; consider what possibilities and incredible rewards could come from such an offer.

After accepting Keira’s plea, she reveals that the mission is to rid Fyke Island of a curse. So now another quest, “A Tower of Mice,” will begin. Return to Keira for the final quest, “A Favor for a Friend,” which is your only chance to romance Keira Metz in The Witcher 3.

“A Favor for a Friend” Quest

On this journey, you must aid Keira Metz in recovering her package that was misplaced during transit – a package that contains the much-needed ingredients for dinner.

After offering her aid, Keira finally invited Geralt to a romantic moonlit dinner as a gesture of gratitude and possibly something more. During the meal, she confessed that she had feelings for him and desired an intimate relationship.

When Keira speaks of “A Friends with Benefits,” an interaction window will appear, prompting you to choose one option. Select the “Don’t have to ask me twice” button for a favorable outcome. Using your Witcher senses to discover Keira in the water, automatically initiate a romantic scene. Following this, Geralt will wake up without her because her successor puts her into an enchanted sleep. Finally, you can reunite with Keira at Fyke Island for more quests!

That’s all there is to it! Now you know How To Romance Keira Metz In The Witcher 3. So go forth and romance this enchanting sorceress confidently, and make sure that your choices are wise. Good luck!