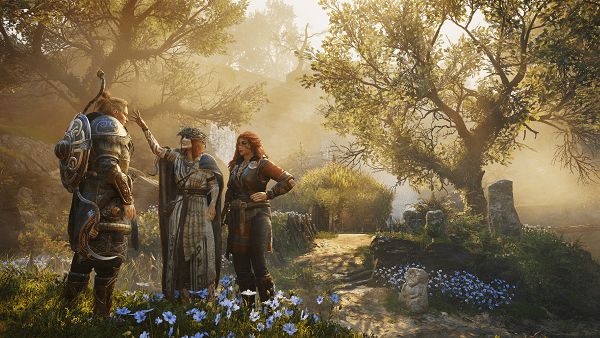 Wrath of the Druids DLC for Assassin’s Creed: Valhalla brings a new romantic interest for Eivor. A bard named Ciara. Like all other romantic interactions in AC: Valhalla, this one is fairly straightforward but is also missable. In this guide, we’ve detailed everything there’s to know about how to romance Ciara in Assassin’s Creed: Valhalla – Wrath of the Druids. Also, before we begin, please note that the guide contains potential spoilers related to the main questlines.

When it comes to romancing Ciara in Wrath of the Druids, it all comes down to a few dialogue choices. And all of it is quite simple. Below is an overview of dialogue options that needed to be selected in order to romance Ciara in the DLC:

There isn’t any other choice that matters except the two mentioned above. Select the dialogue choices and a cutscene between the two will play out – it shows Eivor and Ciara making out near the waterfall. The cutscene transitions into Eivor waking up at the top of the waterfall with a letter from Ciara by his side. I’ve also linked the said cutscene for those who somehow missed it:

Lastly, do note that Ciara can’t be invited to Ravensthorpe no matter what. The DLC’s endings either have her killed or exiled. There isn’t any third option.