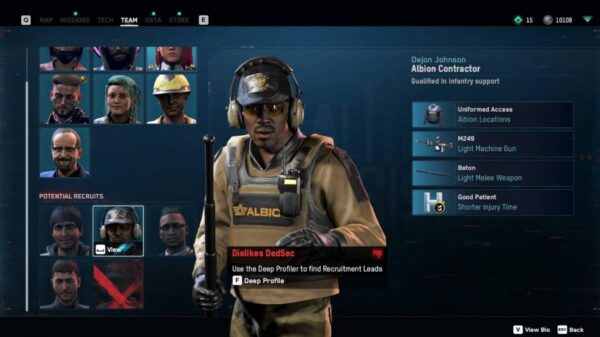 In Watch Dogs: Legion, some characters might be repulsive towards DedSec, mainly due to their line of work or some bad experience in the past. But if you require such a character to join your team to add a specific skillset which other characters lack, worry not, we’ve got you covered! In this guide, we’ll explain how you can recruit people who dislike DedSec in Watch Dogs: Legion.

Watch Dogs: Legion – How to Recruit People Who Dislike DedSec

Recruiting people who dislike DedSec can sometimes prove to be very clinical and well worth the time you’ve spent to win them over. You’ll just have to butter them up a bit, do favors for them, and show them who the real enemy is.

Characters such as Albion contractors, cops, or guards may help you clear a mission you’ve been stuck on for the past week. Recruiting people from Albion can help you to infiltrate restricted areas completely undetected and gain first-hand intelligence which otherwise would be very difficult or even impossible to get. This can make your progression in the storyline much easier.

You can tell if a person likes or dislikes DedSec the moment you first hack into their profile. It’ll be indicated by a red thumbs-down icon. If you add them to your “Potential Recruits” and hover over them in the team menu, it’ll ask you to “Use the Deep Profiler to find Recruitment Leeds”. This is where the real game starts!

Deep Profiler is a very useful upgrade available to buy in the ‘Tech’ menu for 25 Tech Points. If you don’t have enough Tech Points, simply open your map and look for little green rhombus-shaped icons. These icons represent the location of Tech Points which are available to pick up.

Each pickup will award you with 10 Tech Points, meaning you’ll need to pick up at least 3 to unlock the Deep Profiler. Also, avoid Tech Points which are located in restricted areas and instead opt for the ones in public areas as they’re much easier to get.

After you’ve unlocked the Deep Profiler, hover over to that character again in the ‘Team’ menu and press the indicated key to deep profile the character. Doing so will reveal some data about them which includes their everyday schedule and recruitment leads which you can investigate to raise their support for DedSec.

Just pick a lead from the given list, mark it on the map, and head straight for it. Upon reaching the destination, you’ll most likely be assigned a task. After you complete that task, the person will become more accepting of DedSec and will be open to the idea of joining.

And then you can proceed with the recruitment process as normal i.e. finding them again and doing the standard recruitment mission which if you pass, they’ll join DedSec.