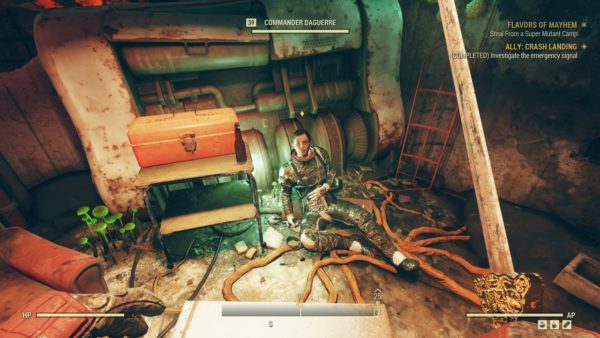 How to Recruit Commander Daguerre

To recruit Commander Daguerre you need to be at least level 25 and effectively complete the companion quests. As you reach the eastern-most side of the map you will hear a distress radio emergency message. Commander Daguerre crash-landed in that area, we strongly suggest going to this location only after level 25. You can find her in The Mire, around the East Ridge Lookout. Most of the enemies in this location are level 22 or higher. There is an Abandoned-Bunker in this area, you can spot in by opening map. The Commander is inside the bunker, injured and in need of your help. You will find her near generator inside the bunker, speak to her inform her of the war. Afterward, she will ask you to gather the flight recorder from her crashed ship.

You can find her ship to the southwest, due west of Gulper Lagoon. Head there and locate the flight recorder for Commander Daguerre. Before you get to recover the data there is a two-minute wait before you can download the recorder information. In this time you will face a few Super Mutants. Once you have the data head back to Commander Daguerre and she will give you another task, recover the encryption key from the U.S.S.A robot. The location will be marked on your map, south of the Gulper Lagoon. Recover the key after a fight and return to the commander. Now you can recruit Commander Daguerre for your C.A.M.P in Fallout 76 Wastelanders. However, you need to first build her a command console for her. It’ll be under the Allies tab in your C.A.M.P workshop. There is no cost associated with the creation of the command console.