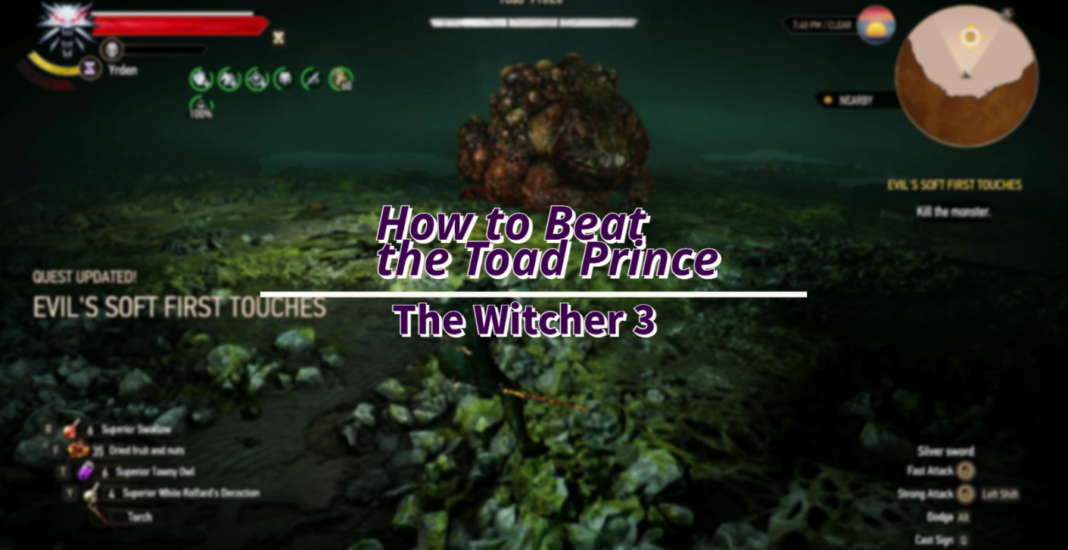 Introducing the Toad Prince: Sirvat, heir to the Ofiri throne! This giant and venomous Toad will be familiar if you have played The Witcher 3: Wild Hunt’s Hearts of Stone expansion. Take heed, for his size and power are both considerable. Deep beneath the sewers of Oxenfurt, a cursed foe awaits – an abomination born from Olgierd von Everec’s powerful enchantment that reshaped its form.

Before you confront the Toad Prince, a wicked creature from The Witcher 3 bestiary that Olgierd has commissioned you to eliminate, make sure every battle preparation is in order and be ready for what awaits you when reaching the Oxenfurt sewers. In this guide, I’ll tell how to kill the Toad Prince In The Witcher 3.

How To Beat the Toad Prince

During the opening hours of exploring Hearts of Stone expansion in Witcher 3, you will be confronted with a daunting challenge: The Toad Prince. Don’t let its cute appearance fool you. This creature has proven far from an easy fight and can quickly plunge you into dire straits. Below I’ve listed the things which will help you out in the battle:

Those with a cursed fate in the Witcher 3 are most vulnerable to Silver weapons. Therefore, when battling the Toad Prince, you must equip yourself with a Silver Sword for maximum damage.

Beware of the Toad Prince’s poisonous toxic gas attacks! Entering this arena unprepared can put you at risk of succumbing to its powerful poison. To ensure your safety, drink Golden Oriole Potion beforehand; this will strengthen your immunity so that the toxin cannot harm you.

Applying the Cursed Oil on your silver weapon will result in more danger and increase attack power. Its various variants are listed below:

You might think Yrden Sign is unimportant in the game, but nothing could be more untrue. This magical sign will be your most powerful asset against The Toad Prince. When battling a monster, cast the Yrden sign to create an effective trap. When it enters the area of effect, it will become stunned for a moment; during this time, you can dish out severe damage.

Are you brave enough to take on the Toad Prince? Igni Sign is your weapon! When cast onto him, it will cause fiery destruction. For the greatest impact, cast this spell when the prince’s mouth is open to take advantage of poisonous clouds and venom. This will amplify its destructive power and inflict significant damage on the monster. When you are targeting the mouth of the Toad Prince, you must be careful because you will be in its range which could prove immensely dangerous.

If you’re having trouble hitting the Toad Prince as it jumps to evade your Yrden trap, casting Northern Wind will give you an edge. This sign freezes your enemy, allowing for easier targeting and more successful hits.

You should understand your enemy’s attack patterns to gain an edge in battle. I have compiled a comprehensive list here detailing Toad Prince’s striking tendencies and how to protect yourself during combat. Knowing this information will give you the upper hand.

When you reach the Toad Prince, he will perform a Jumping Slam. Therefore, be prepared to dodge out of the way while your foe is in midair if you want to save yourself from getting hurt.

When you are within the Toad Prince’s range, it will attack swiftly and powerfully with its tongue. Therefore, be ready to dodge because doing so is no easy feat!

When the Toad Prince notices you are in its vicinity, it will employ its powerful legs to slam at you with lightning speed. Evading this attack can be tricky; however, your best bet is to quickly maneuver out of harm’s way by dodging toward either side.

The Toad Prince’s signature attack, the Venom Spit, is a long-range assault combined with poisonous gas bombs. Despite your best efforts to dodge this by keeping to one side of the battlefield – it won’t be enough; toxic fumes will force you out and away from safety!

Well, there you have it, folks, all the tips, and tricks you need to take down that Toad Prince once and for all. Stay calm, plan your attack, and use the right gear. With this guide, you’re guaranteed to come out on top. So go out there and show that toad who’s boss. If you need more help with The Witcher 3, here are some guides you may like: