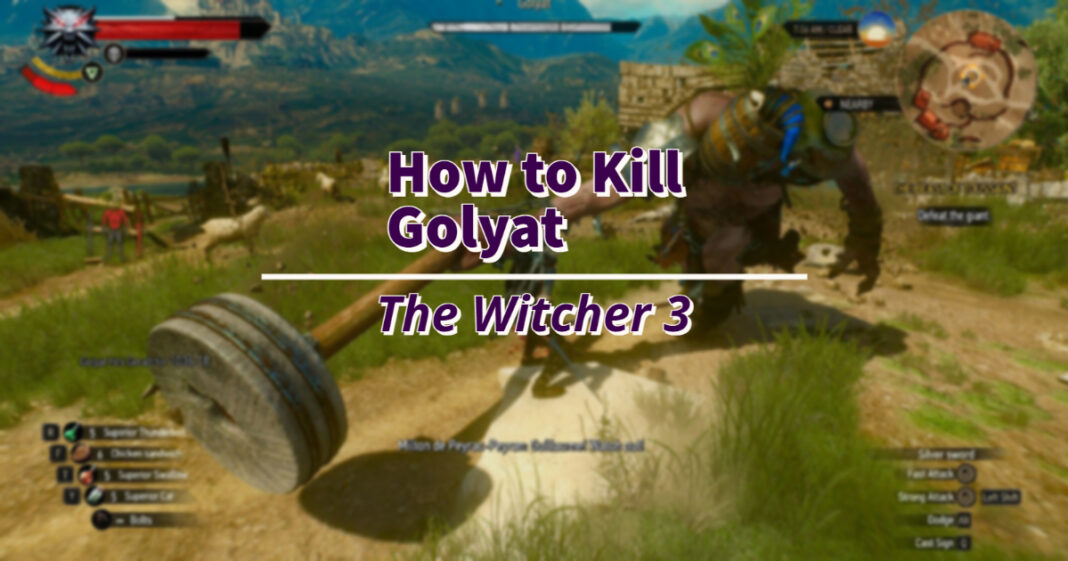 The Blood and Wine Expansion of Witcher 3 is teeming with all manner of monsters, the first being Golyat. This formidable Ogroid class creature towers impressively, exuding a fierce strength that belies its size. However, the Golyat will not be defeated without careful planning, as it is considered one of the most formidable gaming bosses. This guide will show you precisely how to take down Golyat in The Witcher 3 and gain the David and Golyat achievement.

Where To Find Golyat (Locations)

To encounter Golyat, you must finish the Envoys Wineboys quest and unlock entry to Toussaint from The Beast of Toussaint. This major mission is part of the Blood and Wine Expansion Pack – so what are you waiting for? Embark on this epic journey now to gain access.

As soon as Geralt enters Toussaint, he is faced with an alarming foe – Golyat. Suddenly appearing from a windmill near the entrance of Palmerin de Launfal and Milton de Peyrac, this powerful monster launches into battle without warning. Now it’s up to Geralt to seize control and triumph over his daunting nemesis.

The Golyat may appear as an immense giant, but you should be concerned about more than just its size. It boasts a multitude of remarkable abilities that can’t be overlooked.

To defeat the Golyat, Ogroid Oil and Quen magic sign will be your most powerful weapon. Apply Ogroid to your sword for increased damaging capabilities. Use the Quen sign as a defense since Golyats’ hits are both slower and widespread – meaning they can potentially cause more damage. Although dodging its attack is virtually impossible, the good news is that this creature’s attacks are quite slow-paced. This grants you ample time to build up enough Quen energy to protect yourself from the next hit.

You can defeat Golyat when he takes the time to launch his attack, so use this opportunity to your advantage.

Be warned–the Golyat’s onslaught of attacks will surely knock you off your feet and leave you stunned. If you stand in its way, the powerful shockwave of this creature will certainly cause nothing but death and destruction! Therefore, do not attempt to block or challenge it unless prepared for a battle like no other.

Steady your arm and aim with a crossbow at the center of Golyat’s head. While it may appear daunting, if you can focus on keeping your hand still, then hitting the mark is possible. To save yourself some time, take advantage of Yrden and launch a sequence of strikes from your sword while he’s stunned. To take down Golyat, you must use Quen Sign to form a protective layer and move in close for two successful strikes.

Use Yrden to slow Golyat, allowing you to aim for his eye. If successful, he won’t be able to die instantly; instead, take the time and use your calculated precision to defeat him. As a result, you will earn David and Golyat achievement. Unleash your superhuman potential by unlocking the Lightning Reflexes skill, which allows you to slow down time by 45% when aiming for a hit.

That’s all it takes to kill Golyat in The Witcher 3: Blood and Wine Expansion. Remember that this formidable foe isn’t easy to defeat, but with patience and skill, you can take down Golyat and come out on top. Want to know more about being a Witcher? Here are some guides you might like: