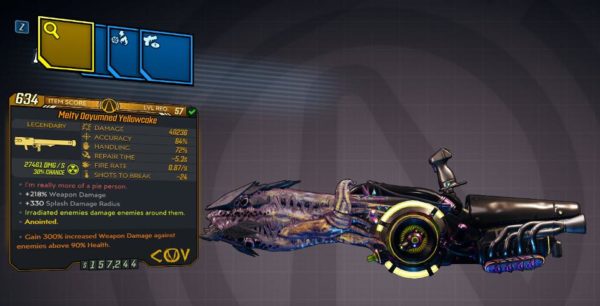 How to Get Yellow Cake Legendary Weapon

Yellow Cake is a new CoV launcher that drops in Borderlands 3. If you don’t get yourself this legendary weapon during this event, it won’t be available again. However, there might still be a chance to get this weapon in a future event or something if Gearbox allows it. Yellow Cake can shoot orbs that explode and split into two orbs that explode which them turn into 4 orbs that explode. It is complete mayhem when playing with this new legendary launcher. In order to get Yellow Cake in Revenge of the Cartels  Borderlands 3 event, you take down any of the three bosses.

Glowing enemies spawn Cartels and Cartels drop intel which you can give to Maurice. You need 30 pieces of intel before moving forward. Once you trigger the event you can take down any of the three bosses above and get yourself the Yellow Cake launcher in Revenge of the Cartels. We suggest going after Joey Ultraviolet as it will also complete one of the challenges.