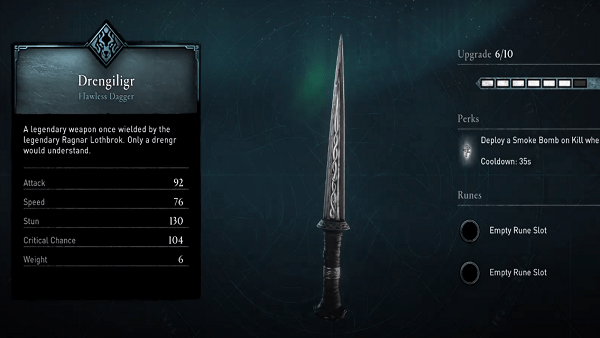 The location is marked on your map, visit the area and you will find a well. Use your Odin’s Sight to mark the snakes and kill them with a bow before jumping down into the well.

Trigger your Odin’s Sight again once you’re inside the well to start a cut-scene. You will be taken through the final moments of Ragnar, how he was captured and thrown into the well to die. He was caged up as you can see the now-empty cage still inside the well of snakes.

After the scene ends you can pick up the Drengiligr Dagger. It should pop up in front of the empty cage. The dagger is a really useful weapon but the most powerful though. Drengiligr Dagger deploys a smoke bomb on kill when outnumbered. It means whenever there are multiple enemies attacking you, kill one of them using the dagger and use the smoke to getaway. It also has two rune slots for further enhancements.