Home Guides Stronghold Warlords How to Get More Diplomacy Points in Stronghold: Warlords 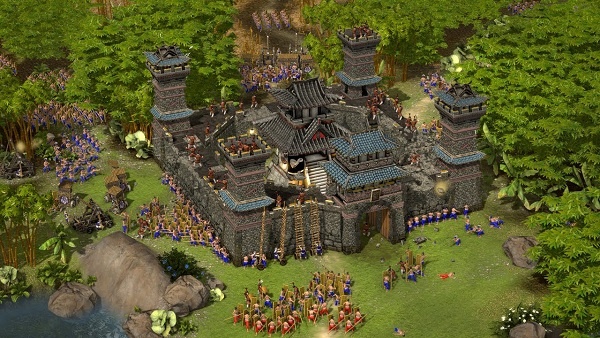 Diplomacy in Stronghold: Warlords is a resource that can be used to get a Warlord’s support. Since it’s treated as a resource, it’s calculated in numbers called Diplomacy Points. While it continues to increase on its own as the game progresses, there are a handful of ways to speed up the process. In this guide, we’ve detailed everything there’s to know about how to get more Diplomacy Points in Stronghold: Warlords.

Stronghold: Warlords doesn’t have the mechanic in which speaking to other Warlords improves the Diplomacy rating. In this game, increasing Diplomacy revolves around earning Diplomacy Points.

As mentioned earlier, Diplomacy Points are earned automatically as the game progresses but it’s just six Diplomacy Points per minute of gameplay which isn’t a lot. Things that can improve it include the construction of different buildings e.g. Embassies, Consulates, etc. In addition to this, constructing roads that connect these buildings to the base also increases the amount earned.

Another important thing to keep in mind is that there can be a maximum of two Embassies and four Consulates at a time. Also, remember that it’s an ongoing process that must be carried out throughout the entirety of the game.

When sufficient Diplomacy Points have been collected, a Warlord can be bought. To do that, click on the ‘Diplomacy’ icon at the bottom-left of the screen to bring up a map of different regions. Simply select the desired region from the map and click the icon of a man. It’s from this menu that Obedience can be traded in for Diplomacy Points. Once done, the Warlord will yield complete support to the players along with executing requests.

However, as mentioned earlier, it’s an ongoing process and a Warlord’s favor isn’t lifelong. It all depends on the highest bidder. Any AI or a human player can outbid when it comes to the Diplomacy Points to shake things up.