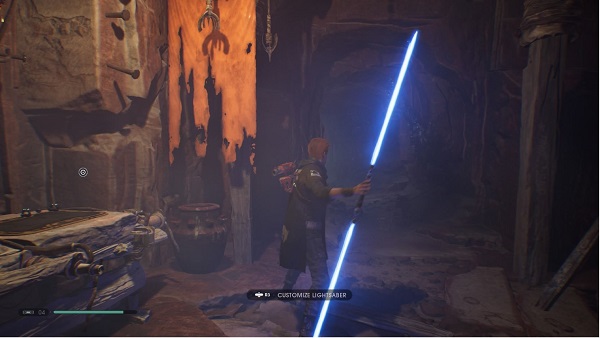 Firstly you have to go to Bogano where you will get the recording of Emo Cordova. After acquiring it two locations will unlock for you to explore. The areas that will be unlocked are Zeffo and Dathomir. Now as I said before that you have two ways of getting the lightsaber. Either you can go and find the lightsaber at Zeffo or you can go to Dathomir and find it there whichever suits you.

First I’ll tell you how to get the lightsaber if you want it in the Zeffo way. There are two requirements at first here which are to complete the area “Zeffo” and you have unlocked the skill Force Push. If both of these requirements are fulfilled then go to Mantis and talk to him.

He will tell you to go to Bogano and imply that you can get the lightsaber there. Go to the Great Divide in Bogano and approach the partially broken bridge. Use your force push to get it back in its place and go across it and go straight.

After a while, you will reach a fork turn right here towards the broken platforms. Now once on the platform jump down and go towards the wall with the vines to climb up. After that go upwards until you reach a door. Get inside to find all the parts required for the lightsaber on a bench.

The second way is a bit tricky and might be long but doesn’t have any requirements. Go to the Island named Strangled Cliffs in Dathomir. Now on this island, you have to go upwards towards Brother’s Bastion. When you arrive at the save point here go up and right and go up the stairs while dealing with the enemies around it.

Inside take the path on your left and wary of the archers on the above floor. Climb up and deal with then and go to the area where you can see a giant spider at a distance. Jump down to the enemies and go towards the temple. There is a space up ahead where you can go up or down.