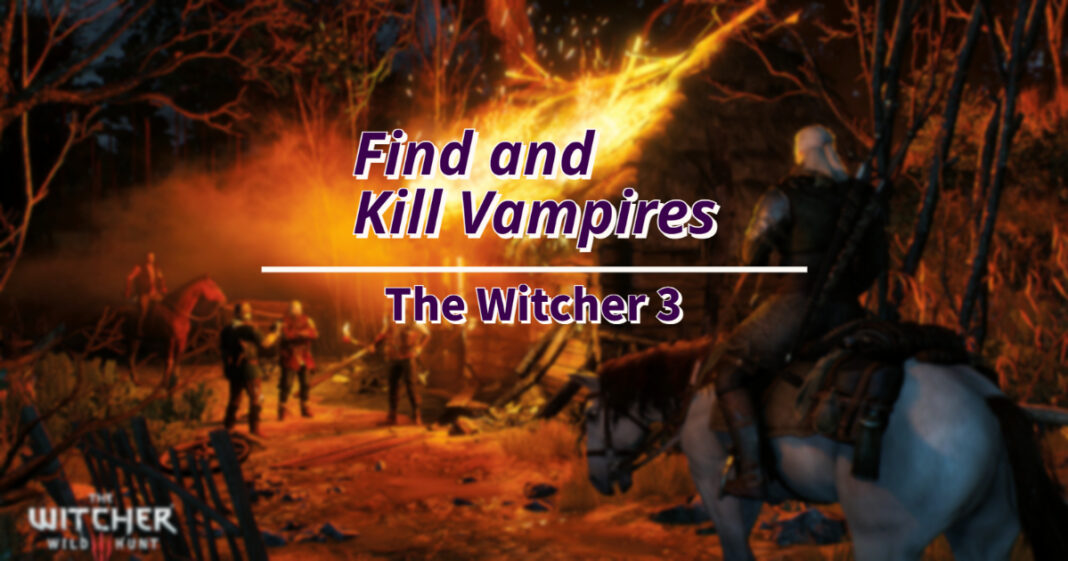 As you journey through The Witcher 3: Wild Hunt, prepare yourself for a variety of adversaries like Bears, Vampires, Wolves, and Wild Dogs. Of all these opponents, vampires are the most hazardous and demanding to defeat. The cause for these fears is that vampire legends have been debunked, such as the notion that holy water and crucifixes are their only weaknesses when in reality, a wooden stake to the heart can end them. However, not all vampires are difficult to overcome. They come in different types, from Ekimmara to higher, and the higher ones certainly aren’t simple to defeat. In this comprehensive guide, you’ll quickly learn all about the Vampires: their whereabouts, how to eliminate them swiftly and effectively, what makes them vulnerable – and so much more!

Where To Find Vampires in the Witcher 3

As you progress through the contracts and complete side quests, watch out for Vampires.

To acquire the Carnal Sins, you must make your way to Novigrad–a free city within Redania’s coastline. Once there, find and eliminate a Katakan named Hubert Rejk. Remember that If you are looking to begin The Isle of Mists quest, Carnal Sins is a prerequisite that must be completed first.

As you search for the Griffin School Gear set in Novigrad and Velen, be on the lookout for a lower vampire known as an Ekimmara. If spotted, they must be dealt with accordingly to ensure success.

Higher Vampires are scattered everywhere in the Blood and Wine expansion of The Witcher 3. This story centers around Regis, a former friend of Geralt’s who died and was resurrected as a vampire.

How To Kill Vampires in the Witcher 3

The Witcher 3 is home to a wide variety of Vampires, and while you’re hunting them down, certain tactics will prove helpful in defeating them. Although not every technique listed below may apply to each Vampire type, one or more of these methods should work against any given creature.

If you’re looking to hunt vampires in the Blood and Wine expansion pack, Vampire Oil is necessary. This oil will ensure success regardless of the type of vampire you desire. Enhance Geralt’s fighting prowess by applying Vampire Oil to his silver sword; this will render extra damage against opponents.

The Black Blood potion is a must-have for any vampire, providing essential protection against even the most potent attacks. This powerful concoction ensures you remain safe and secure in your nightly adventures. When protecting yourself against the two dreaded vampires, Bruxas and Alps, Black Blood is your go-to defense. However, this remedy will only make you a little sound when faced with creatures that don’t drink blood – so be sure to have a backup plan in place.

If you’ve ventured into the Blood and Wine expansion, chances are that you have come across an eerily invisible vampire. For such creatures, a Moon Dust bomb would be your best bet to uncover them before they can transform again. With one swift throw of this incredible explosive, those vampires won’t stand a chance.

All Vampire types are vulnerable to fire, so you can use it to gain an advantage. However, the Higher Vampire is not susceptible; casting Quen will serve as a shield of protection for you.

Which Types of Vampires in the Witcher 3

The Witcher 3 introduces seven distinct vampire types, each with its unique characteristics. See the list below for more details:

Ekimmara is the most common type of vampire you’ll encounter at the base of the hierarchy. Be sure to take them out quickly in-game, as they have a powerful regenerative ability. Ekimmara has the following moves:

The Byways Murders contract will lead to a stronger variation of the Ekimmara: the Sarasti. While their attack and weak points are similar to those of regular Ekimmara, be sure that you come armed with Vampire Oil and use Ignis’s magical sign for your battle against these powerful vampires.

When facing off against a Katakan, use the Yrden sign, essentially a trap that will hinder its movement. Exercise caution when encountering these creatures and use Vampire Oil to defeat them with your silver sword easily. It’s best to drink Black Blood as an extra precautionary measure for safety’s sake.

Katakan has a variant known as Gaeal’s, which you may come across while making the Oxenfurt Drunk contract. They use similar attacks to Katakans too.

Alp vampires are blonde hair women exclusive to Blood and Wine expansion. Following are their moves:

When confronting an Alp in a group, use the Black Blood to protect yourself. The Aard sign is your best bet for attacking this vampire, and when it’s down, move in with silver swords to finish them off – be mindful of their shrieks!

Bruxas vampires and Alps are very similar, with the only significant difference being their Witcher bestiary listings. However, both of these creatures possess similar abilities. Following are the moves used by them:

Distinguishing between Bruxas and Alps is simple; you can easily recognize the former by their dark hair, while the latter are known for their blond locks. Other than that one physical trait, there isn’t much else separating them.

Using the Aard sign to deliver a fatal blow and immediately eliminate this vampire when you encounter Bruxa. The main storyline of Blood and Wine will bring you face-to-face with a powerful vampire, the Bruxa of Corvo Bianco. Unfortunately, your trusty Aard sign won’t work on it- all other tactics for fighting vampires still work.

Fleders are a lesser type of vampire, yet they demonstrate remarkable intelligence and employ specific attack strategies. Here is what you should know about them:

Fleders are particularly vulnerable to Vampire Oil, Cast Igni, and Black Blood, so it’s wise to be prepared with either when they begin leaping. This makes them far easier to defeat, as you’ll have an advantage over their evasive tactics if armed with these substances.

Fleder has an alternate form known as Protofleder that can be encountered during the main quest of Blood and Wine, entitled ‘What Lies Unseen.’ The Protofleder boasts extraordinary health regeneration compared to its regular counterparts.

Compared to other Vampires, Garkains are scarce in quantity and can be somewhat repulsive. Follow are the moves that Garkain uses:

Taking down vampires is far easier than other types of vampires. When you see them and use Vampire Oil on your sword to increase the damage, if they use ranged attacks instead, Moon Dust bombs will help serve as a successful counter-move.

The Alpha Garkain variant can be encountered during the Blood Simple main quest, specifically near Cockatrice Inn. These formidable monsters are more powerful than their regular counterparts and possess similar attack techniques – except for being able to spew venom.

As you progress through The Witcher 3, the most potent and challenging adversaries in your path are undoubtedly the High Vampires. With their immense power, these vampires will test every ounce of wit and skill you possess.

These vampires stand out from the rest with their remarkable intellect and power. Immortal, they do not require to ingest human blood to survive like other vampires. Outfitted with only a few weaknesses, any techniques that worked against traditional vampire species won’t work here – these are modern-day beasts!

Finally, your journey in Blood and Wine will lead you to Dettlaff van der Eretein: the mighty Beast of Beauclair and the ultimate boss of this epic story. This vampire’s only vulnerabilities are Vampire Oil and Black Blood; fire is ineffective in combating it, so there is no benefit to using Igni or Dragon’s Dream bombs.